Stories That Must Be Told: Using Arts and Crafts to Clarify the Truth about Falun Dafa (Photo)

(Clearwisdom.net)When I saw Clearwisdom's request for article submissions related to Falun Dafa Day, and that arts and crafts were among the categories on the list of subjects to be considered for publication, I thought of sharing how, as a professional doll artist, I have been using my skills to clarify the truth about Falun Dafa over the past ten years. I go to several large trade shows every year to display my dolls to potential customers, and I always try to have some special information to hand out at my booth related to Falun Dafa.

What I've learned is that sometimes dolls have stories to tell. They can have a purpose and a mission.


Sometimes I use a doll or group of dolls to tell a story that must be told. In the following example, I made the three porcelain dolls and created a fictional story around them so that I could display them at trade shows and on my website. 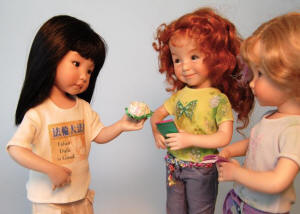 Show and Tell Day (Excerpted from a longer story)

Monday morning is Show and Tell in Mrs. Higgins' classroom. When she asked if anyone had brought anything for Show and Tell, Linzee boldly raised her hand. Louisa's hand went up but not quite as boldly. One other person raised her hand. It was Mei Chen. The teacher called on Linzee first. Linzee said that she and Louisa would like to go together, so the teacher nodded to Louisa, who suddenly felt shy. But she joined her friend at the front of the classroom and together they took off their jackets and revealed their colorful, hand painted shirts. Each shirt had a large butterfly stencil design in the middle and colored flowers all around it. Linzee described how the shirts were dyed and decorated. She teased about how Louisa was a little nervous about painting on her shirt at first but finally got the hang of it.

When they finished, the class applauded and admiring comments were heard. Louisa and Linzee returned, smiling, to their seats as words like "Awesome and "Way cool" filled their ears.

"Mei Mei, what have you brought to show us today?" asked the teacher. The room became quiet again as Mei Mei walked to the front. Louisa was curious. Mei Mei was a new friend, too. She was very smart and always very polite. She was quiet like Louisa and maybe "a little shy," but when she spoke, it was in a soft voice with calm assurance. She always explained things very clearly. Louisa always liked to hear Mei Mei talk. Now Louisa wondered what Mei Mei was going to talk about. She noticed some words on the t-shirt that Mei Mei was wearing. There was a pretty flower design on the shirt, too. Mei Mei was holding something in her hand. She held it up for the class to see. It was a flower made out of some kind of shimmery, folded paper. "This paper flower represents a lotus flower," explained Mei Mei. "My mother helped me learn how to make it. I made this one all by myself. I have some paper in my backpack. Later on, the art teacher said that I can show you how to make one."

At this there were sounds of delight from some of the girls. The class was all at attention. "The lotus flower has a special meaning for the Chinese people," continued Mei Mei. "The flower's petals are pure and clean and beautiful, even though it grows straight up out of the dirty mud. My mother told me that we can be like the lotus flower if we think about that. Even when life is hard sometimes or someone is mean, we can still be calm and kind and gentle."

There was a momentary calm silence in the classroom, then a boy asked, "What does it say on your shirt?" Everyone had been wondering about that. "It says, 'Falun Dafa is good,'" said Mei Mei. "What is Falun Dafa, Mei Mei?" asked Mrs. Higgins. "It's a kind of exercise and meditation practice. My family practices Falun Dafa. That's why we want to tell people that Falun Dafa is good. A hundred million people all around the world are practicing Falun Dafa."

"Wow! One hundred million!" thought Louisa. That's the biggest number she had ever heard.

The class applauded as Mei Mei returned to her seat. The teacher said to her, "Maybe you would like to show us some of the exercises next Monday." Mei Mei smiled and said, "Yes, I would."

"Falun Dafa is good," a simple message born by an innocent child. Falun Dafa has indeed benefited millions of people worldwide. Although its true origins are from ancient history, it was introduced in China in 1992 by Master Li Hongzhi. The practice flourished in China in the 90s, as everywhere people practiced the exercises in the parks and news quickly spread of the wonderful health benefits that so many were experiencing. But in 1999, some Chinese Communist leaders were alarmed at the large numbers of people practicing Falun Dafa and decided to ban the practice. Since that time, the steadfast practitioners have peacefully resisted the propaganda campaign and dreadful persecution that has been waged against them, and they continue to spread their message to the world that "Falun Dafa is good."

Meanwhile, in China, hundreds of thousands of Falun Gong practitioners have been imprisoned in forced labor camps. Over three thousand innocent people have been tortured to death. Reports of organ harvesting and genocide continue to leak out of China by way of the Internet. Thousands of people have lost family members, and many children have been orphaned. Some of the survivors travel the globe to tell the world the stories of their loved ones who have lost their lives. To learn more about this terrible persecution, and what you can do to help stop it, go to the "Friends of Falun Gong" website at http://fofg.org/

To learn more about the practice of Falun Dafa, go to http://www.falundafa.org/