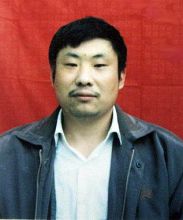 When he was still in his thirties, Mr. Zhang was admitted to hospital every year because of hepatitis B and hepatocirrhosis. After he started practicing Falun Dafa in July 1996, he fully recovered and did not have to take medicine or go to hospital any more. When the Chinese Communist Party (CCP) began the persecution of Falun Gong in July 1999, Mr. Zhang wanted to appeal for Falun Gong in Beijing and tell everyone that "Falun Dafa is good." Police intercepted him in Jinan City. The management of the Laiyang City Spun Silk Factory took him back to his hometown, detained him in the factory for 7 days, and tried to "transform" him.

Mr. Zhang refused to give up his Falun Gong practice and wrote the words "Falun Dafa is Good" on an overpass one autumn night in 2000. Three officers saw him. They beat him, kicked him, and sprayed the remaining paint to his face and body.

He was taken to a detention center where he was not given enough food, verbally abused and beaten by other inmates who were assigned by the guards to closely monitor and torture him. The other inmates also stole most of his quota of steamed buns. He received so little food that his bowels did not move once during the whole month he was imprisoned and he got sick again.

During the 2001 October 1st holidays, the management of the factory lured him into attending a CCP school under false pretenses. Once there, Mr. Zhang was confined for a week. He was forced to watch tapes which slandered Falun Dafa daily, and was forced to sign statements not to practice Falun Dafa any more.

“Some Thoughts on Xinxing and Sickness Karma”

“Ms. Song Shuye Dies after Enduring over 10 Years of Persecution and Torture”