Finding the Wisdom of Life (Photo)

(Clearwisdom.net) Cai Shu-hui is a fisherman's daughter who grew up in the Penghu Islands. She moved to Taipei to live by herself after graduating from high school. Ms. Cai met her future husband at the Taipei Banbaishi Processing Factory. She worked hard and passed the civil service exam, then became a community secretary in the Shilin District of Taipei. She went through a work-study program and earned her associates degree, and then bought a house and got married. Although Ms. Cai was settled down at that time, she was looking for something more. She had tried various religions, practiced qigong, and read many books about cultivation and longevity. She knew that she was looking for, as she put it, "wisdom and truth," but she had no idea where to find it. 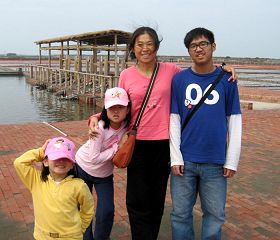 Shu-hui and her three children

"This is what I've been looking for"

In March 2004, Ms. Cai's youngest sister, who had just returned from Germany, introduced her to Falun Gong and gave her a copy of the book Zhuan Falun. She started reading it and couldn't put it down. She liked it so much that she finished reading it in one day. She became very excited and exclaimed in her heart, "This is what I've been looking for since childhood! I have found the wisdom of life in this book!"

She reaturned home and found a practice site with a location and schedule that was best for her, and started attending group practice and group Fa study every day.

Although there were no arguments in the house, Shu-hui had chosen to stay away as much as possible to find peace of mind. She often took her children and mother-in-law out as soon as she had a chance, and didn't care for the house or her husband. As a result, she and her husband grew further and further apart, as if there was a wall between them. Luckily she got along very well with her mother-in-law, who had been helping take care of the housework and the children. So for the most part, all that Shu-hui needed to care about was herself and her work.

After she started practicing Falun Gong, Shu-hui was guided by the Fa principles of Truthfulness-Compassion-Forbearance. She came to understand from the Fa principles that everything had its reasons. With further Fa study, she learned to look inside for her own shortcomings. She has changed from being a person who passively tolerates perceived wrongs, to one who is genuinely tolerant.

As a result, the resentments that she held onto have gradually disappeared. Her husband has changed from being opposed to her practice to supporting it. He sometimes even takes the initiative to help her with Dafa activities.

Shu-hui said, "I didn't know what to do in the beginning of cultivation, and I remained who I used to be. Luckily my mother-in-law had taken care of everything in the house, so I had nothing to worry about. But soon enough, the Fa principles helped me adjust myself and do better. Nevertheless, I am very grateful for my mother-in-law's help."

A year later, in 2005, Shu-hui became pregnant with her third child. She had a twelve-year-old son and a four-year-old daughter, and those two pregnancies were big challenges for her and her doctor. Specifically, during her second pregnancy five years prior, she had to be hospitalized to prevent miscarriage due to laparoscopic myomectomy and placenta previa. As a result, she had to lie in bed all day, wearing a respirator and getting injections twice a day for six months. After the Cesarean birth, she suffered from postpartum depression. This all changed when she started practicing Falun Gong.

The doctor was extremely careful about this pregnancy, and repeatedly advised her to be hospitalized. Moreover, he recommended that she to go to the best hospital in Taiwan - the Teaching Hospital.

Three years ago, after 18 years of service, Shu-hui's company transferred her to the office that was furthest from her home and in the most populated area. Many of her coworkers warned her about the new director, who was very hard to please. They said that his group had the highest turnover rate in the entire district.

The work was initially very tough for Shu-hui. The workload was extremely high, and oftentimes she had to run to keep up with her schedule. However, as a practitioner should, she searched for her own shortcomings and looked at the good side of the director. She understood his good intentions of serving the community, and strove to cooperate and do everything well. She said, "I handled things with Truthfulness-Compassion-Forbearance, and before long, all the problems were solved. The director started to trust me, and everything I saw in him was good. His attitude toward Dafa was very positive. He allowed me to start a practice site in the activity center, and put 'Falun Dafa is Good' posters and information about exercises on the bulletin boards. He also attended the Shen Yun performance and allowed Shen Yun's schedule to be displayed on the electronic bulletin board in the office. He also let me invite practitioners to share experiences and introduce Shen Yun."