Canadian MP: It's a Consensus in the U.S. to Stop the Persecution of Falun Gong (Photo) 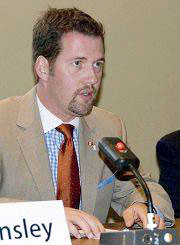 Calling for an end to the persecution is a consensus issue

To our knowledge, all but one of the Canadian residents or relatives who had been subjected to the persecution in China have been successfully rescued. Some relatives have been reunited with their loved ones in Canada.

Speaking of the U.S. Resolution 605, Scott Reid said, "The first thing to comment on is that this was an overwhelming vote in the House of Representatives, it was almost unanimous. It indicates, I think, a widespread support for Falun Gong practitioners 11 years after the persecution started."

Reid stresses, "That is a very strong sign that this is a consensus issue in the US as it is here in Canada. Falun Gong should not be persecuted and the Peoples Republic of China needs to start respecting human rights."

Reid said that the resolution indicates a number of things. "It indicates that, number one, American opinion is not going to change in its affirming the right of Falun Gong practitioners to carry on their activities. And it is an indication--as well a recognition--that the situation has not improved. And it is time for the Chinese regime to recognize that international opinion is going to stay firmly behind the right of Falun Gong practitioners to practice their beliefs..."

Passing a motion is effective

MP Reid believed that passing the motion was effective. He said, "This works. We got people out of prison in China, number one, and, number two, we know from experience that since they came here, they have been model Canadian Citizens. We could not ask for better people to come to Canada.

"And so I am thinking, if we have the opportunity, we should try as much as we can to accommodate Falun Gong practitioners, especially when they have family here. Family who want to be reunited with them. It is such an obvious thing for a country that believes in humanity, believes in human rights. To try and assist these good and honest people to become residents of our country."

Raising the human rights issues does not affect trade

Reid said, "If China is pushed in the direction, encouraged in the direction of being true to its own cultural roots of being a respecter of human rights, then that is good not only for the people of China, it is good for the entire world. But if it moves away from that, it is very dangerous for the world, and we as Canadians and everyone in the world needs to be concerned about that."

Reid doesn't think that raising the issue of human rights with China will affect our bilateral business relationship. He said, "The history has been that our trade has increased with China over the period of time that our government has been in power. The Conservative government that has taken human rights seriously."

Reid regards U.S. Resolution 605 as a great motion. He said, "It was very positive. It sent out a powerful signal that the United States cares about Human Rights, that the United states is not going to abandon the people of China in general or, in particular, Falun Gong practitioners. Even though the persecution is 11 years old, the resolution indicates very strongly that human rights in China is going to remain on the agenda as long as it has to remain on the agenda."

Reid thinks that the Canadian Parliament could pass a similar resolution. He said, "That is an obvious thing we could do. That, I think, would be the most beneficial thing to show that, in Canada, as in the United States, we continue to stand in solidarity with the people of Falun Gong and all the people of China who deserve to have their human rights respected."

Regarding the grand trend that 70 million Chinese people have quit the CCP and its affiliated organizations, Reid said, "It indicates that there is a social change at work."

He thinks it is probably an indication of something that is going on throughout China, which is a broadening of civil society. He said, "People are looking to other sources than just to the Communist Party to find their moral bearings, to find their guide to action.

"And that is a very healthy thing for Chinese society, as it would be in any country, to have multiple sources where people could find their moral bearings. That is part of the same movement that the Falun Gong is part of. A growth in the society, a return to being a natural, multifaceted society, which the totalitarian past of China pushed away from--that heritage."

“The Maltreatment of Mr. Yang Weihua Before His Death”

“Theatergoers in Edmonton, Canada, Feel the Divine and Appreciate the History (Photos)”