(Clearwisdom.net) The Divine Land Marching Band of Toronto, consisting of local Falun Gong practitioners, was invited to perform in the Easter Parade on April 5, 2010. It was their third time participating in this parade. 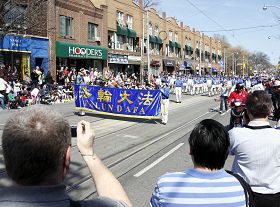 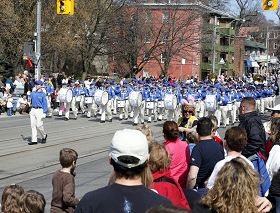 The parade began at Victoria Park Ave. and Queen St. at 2:00 p.m. Over one hundred groups participated in the parade and thousands of spectators watched it.

Parade director Sharon Ramsden highly praised the band. She said, "It's my favorite." She has invited the Divine Land Marching Band to participate every year, and said she will invite the band in the future. 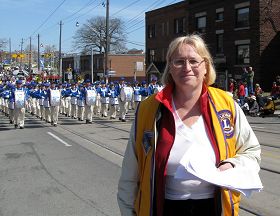 Many Chinese people expressed how much they enjoyed the band's performance. Ms. Yu from Beijing said, "It's my first time seeing such a big Falun Gong group. Their performance was great." Ms. Lin from Guangzhou said, "This is my first Easter in Canada. I am excited and feel lucky that I saw Falun Gong practitioners perform, which is impossible in China."

Ms. Chen from Shandong said tearfully, "I asked my husband to videotape the band. I've seen them in many other parades. They are being persecuted in China, but are very welcomed overseas. I feel sad for their suffering, and I am touched by their spirit."

Some other Chinese also said that they were proud of the band.

Many Westerners also said they liked the band. 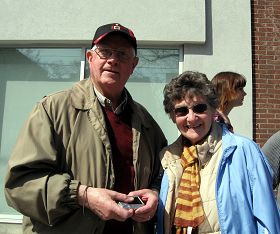 Mary and Bill live in Toronto. They said that they like everything about the Divine Land Marching Band, including the music, the color, and the rhythm. They have seen the band in many parades, and took photos every time. They plan to tell their friends about the persecution of Falun Gong and ask them to help stop it.

Heather shouted "Falun Dafa is good" when she saw the band. She said, "I've seen them many times. I know about the persecution. Their spirit and courage deeply touched me." She cried, "I support them. I'm excited that they are free and happy here. I want to cry every time I see their performance. I am grateful that they bring us such beautiful music." 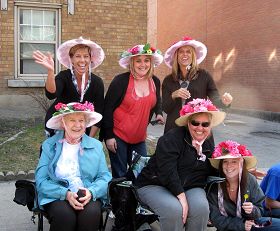 Cherry (back left first) and her friends

Cherry and her friends shouted for the band, "I am happy to see them again. I appreciate their performance very much. They are the best." 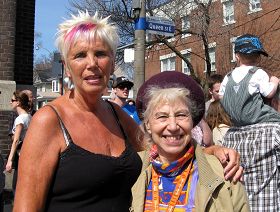 Seventy-year old Elvira was excited to see the band. She said, "I've been waiting for them today. I've seen them in every parade for the last few years, and I expect to seen them. Their performance brings me indescribable excitement."