(Clearwisdom.net) On April 25, 2010, Falun Gong practitioners gathered in front of the Chinese Embassy in Denmark, commemorating the eleventh anniversary of the April 25 peaceful appeal and protesting the cruel persecution of those who practice the principles of Truthfulness-Compassion-Forbearance.

In the afternoon, they went to Copenhagen City Hall Square to continue explaining the facts to passersby. After learning about the Chinese Communist Party's persecution of Falun Gong, many expressed their support for practitioners' peaceful protest and signed the petition protesting the persecution. 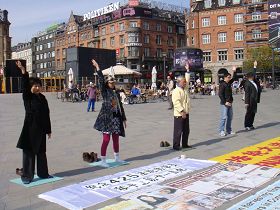 Practitioners demonstrating the exercises and spreading the truth

A retired office worker said, "I was very sad when I saw all of this. Freedom is something we are born with, not something somebody gives us. Everyone should live in freedom. I think it's horrible that people get killed, suppressed, and mentally tortured and that they were not allowed to have their own belief and to express it. All of this should stop. We can't bear to see this terrible thing happening to anyone. People will stand up and say 'No' to the persecutors."

Outposts European correspondent Mr. Guang Yang took part in the activities. He said, "Falun Gong's April 25th appeal was bound to happen. Having no other option, they went to the Beijing government offices because they wanted the CCP to know the truth. They had no banners, no slogans, and caused no harm. They didn't block traffic and didn't trash the area, either. When they left, they took away all the cigarette butts and paper rubbish and left the ground clean. I'd never seen anyone appeal like that before. Why would the CCP persecute a group that believes in Truthfulness- Compassion-Forbearance? It was based on two factors. One is the nature of the CCP. Communism is an evil cult that kills to maintain its own existence. Another factor is that the CCP represents all that is false, ugly, and evil. The April 25 appeal was the magnificent turning point that foretold the coming end of that Communist Party."

An Argentina overseas student studied the display carefully. He was eager to know more about China and talked to a practitioner. After learning about the persecution of Falun Gong in China, he was very surprised. He said, "If we have to choose between money and conscience, certainly it would be human rights."

A fellow who lived in Romania 20 years ago said that he really understood the cruelty of the persecution of Falun Gong.

Several practitioners demonstrated the five exercises in the Square. A woman from Denmark watched for a long time and wanted to learn the exercises. She said, "The exercises are very good and very peaceful. I want to learn them. I didn't expect that the CCP would persecute such a good practice. I wish you luck. Those responsible will be condemned by the whole world. China is a dictatorship, not a liberal democratic nation. This kind of thing is unimaginable for us Denmark."

The Falun Gong Association representative, Ms. Wu, said, 'Today is an important day. Eleven years ago today, Falun Gong practitioners went to the State Council Appeals Office on Fuyou Street near the Zhongnanhai Compound. They were peaceful and rational. Soon after that, Jiang launched the cruel persecution, which is still going on. We call upon people from all walks of life to pay attention to the persecution of Falun Gong in China and to bring it to an end."

“My Insights into "Selfishness"”