(Clearwisdom.net) Practitioners from Seoul and surrounding areas gathered in a park in Goyang City, Gyeonggi Province in South Korea on April 25, 2010. They did the Falun Gong exercises and informed people about the persecution of Falun Gong. 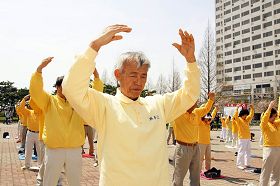 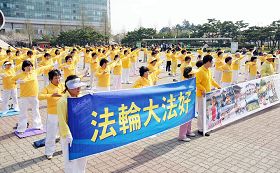 There were many tourists in the park, because there happened to be a flower exhibition and it was Sunday. At 1:00 p.m. that day, more than 150 practitioners began demonstrating the exercises at the entrance to the flower exhibition hall.

During the exercise demonstration, some practitioners talked to the spectators about Falun Gong and what happened during the April 25 appeal eleven years ago.

According to statistics, in the following eleven years, tens of thousands of Falun Gong practitioners have been subjected to detention, forced labor, imprisonment, mental abuse and torture with psychotropic drugs and organ harvesting. As of today, 3,369 practitioners are confirmed to have died as a result of the persecution.

Currently, chief culprit Jiang Zemin and his accomplices have been indicted one after another in international courts for their role in the persecution of Falun Gong. Falun Gong has spread to 114 countries and regions and more than a hundred million people from all walks of life have practiced Falun Gong.

On April 25, 1999, over 10,000 Falun Gong practitioners in China gathered outside the State Council Appeals Office to request their basic right of freedom of belief and the immediate release of 45 fellow practitioners who had been unlawfully arrested. In response to the appeal the Chinese Communist regime promised to protect the practitioners' rights, and the arrested practitioners were released. Three months later however, the regime began a nationwide persecution to "eliminate Falun Gong." The brutal persecution has continued for nearly eleven years.