"The beauty of the dancers was extraordinary," said French Member of European Parliament Jean Paul Gausez.

"It is the first time I attend a traditional Chinese dance show, and I have to say this is quite beautiful, very colourful and vivid, with an almost hypnotic rhythm," said Mr. Gausez.

Mr. Gausez did not forget his parliamentarian colleagues and emphasized that in addition to coordination and beauty, "There is this piece on the [Chinese communist government's] lack of respect for beliefs, that reminds us clearly of human rights issues in China today." He concluded that once back in the Parliament, he would tell his colleagues "to go and see this show that gives a peaceful, smiling, gracious image of China, and that reminds us of Chinese people's real problems." 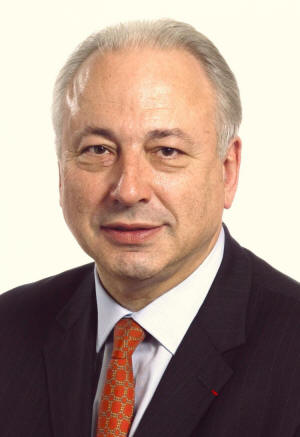 A well-established choreographer and a familiar face in the dance and music industry, Mia Frye has performed on different stages around the world and is familiar with the demeanour and taste of audiences around the globe.

"Parisians are often a little cold," she explained about audiences in Paris.

However, the audience at the Palais des Congrès de Paris on April 25, 2010 were so captivated by Shen Yun's grandeur and masterful display of classical Chinese dance and music that they stood to give the artists a standing ovation at the end of the show, applauding and cheering until the slower-than-normal curtain at the Palais des Congrès opened for a second time after the show ended so that they could wave to the artists once more.

"To the contrary, here we had a concert hall full of people who gave a standing ovation, obviously moved," Ms. Frye said about the audience.

Ms. Frye was born in the U.S. but is now based in Paris. She attended the prestigious Centre de Danse du Marais and started teaching there a few years later. She specializes in jazz and hip hop dance and has appeared on many television shows. She is best known for creating and choreographing The Macarena in 1996.

"I was very excited tonight, touched really, because it was the first time that I am able to find, just like that, all these different dances, and traditional ones, as well as a combination of traditional and folk dances. At the same time, these dances are combined with Chinese classical dance," Ms. Frye enthused about Shen Yun.

And each time, she pointed out, "There is a story behind each scene, each performance, a very strong important story," things that "cannot be said or necessarily spread from town to town, country to country." But tonight, "there it was."

"We are touched. We are extremely moved by the courage. I found, of each scene and performance, the choreography, the merging of the various colors, the way that it is magical, and then all of a sudden it seems that time stops and there is something very pure going on here."

"You're in something truthful, authentic, something genuine and sincere."

What particularly stood out for her was that when each dancer or vocalist is performing, "we feel their soul, the soul of the dancer."

"Sometimes, we are a bit ignorant, sometimes we are a little bit on the 'cliché' side when it comes to China. We do not realize, we forget, that it a thousands-year-old country," she said.

"We must honor them, and this is undeniable."

Then, she summed up what many others watching Shen Yun feel: "We went into a hall on a Sunday afternoon with the weight of the world on our shoulders, and came out of the convention center feeling light, no worries in the world, light as a feather."

Ms. Frye said that in jazz and hip hop dance, the dancer is for the most part in contact with the ground, and the style of dancing is very "aggressive." But the classical Chinese dance presented in Shen Yun is "something very pure, very elegant, very neat," she said, and "it's always better to be true to oneself, in our main essence, I would say, simplicity, purity, and above all sincerity."

Shen Yun "lightens us," she said.