Houston, Texas: Practitioners Commemorate the April 25 Appeal, Call for An End to the Persecution in Front of the Chinese Consulate (Photos)

(Clearwisdom.net) Appealing for the basic right of freedom of belief, more than 10,000 Falun Gong practitioners peacefully appealed on April 25, 1999 at the State Appeals Office near the Zhongnanhai Compound [the seat of the government in Beijing]. They demonstrated their peacefulness, rationality, great compassion and forbearance, and the historical event drew worldwide attention. Today, eleven years later, practitioners in Houston held a rally and a candlelight vigil in front of the Chinese Consulate to mark the eleventh anniversary of the April 25 peaceful appeal. 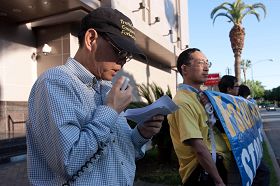 On the evening of April 25, 2010, practitioners in Houston held banners in front of the Chinese Consulate. Several practitioners spoke at the rally to call for an end to the persecution of Falun Gong.

Mr. Wang, a practitioner in Houston, spoke about the persecution of his mother. Mr. Wang's mother was cured of many severe illnesses within a few months of taking up the practice of Falun Gong in 1998. She also became a kinder, more peaceful person as a result of studying the teachings of Falun Gong. Yet, such a good person endured unimaginable abuses and mistreatment under persecution.

Mr. Wang said, "The CCP [Chinese Communist Party] agents forcibly locked up my mother in a mental hospital for more than three months, and tortured her with drugs for psychiatric patients. I was shocked upon learning this news. I flew to Shanghai and went to the Nanjing Mental Hospital the next day. I saw a young nurse feed my mother some medicine and she asked my mother, 'Do you still want to practice Falun Gong? Stop practicing it!' Seeing this, I felt an unspeakable pain in my mind." Mr. Wang added, "My mother was incarcerated in mental hospitals twice and she suffered tremendous mental torments and physical abuses."

Mr. Yang said that commemorating the April 25 appeal is not only meaningful for Falun Gong practitioners, but also represents an awakening of the Chinese people, as more and more of them read the Nine Commentaries on the Communist Party and decide to quit the CCP.

Mr. Song, who has lived in the U.S. for several decades, said, "In the past eleven years, the CCP has carried out an inhuman and brutal persecution of Falun Gong practitioners. The CCP agents employed all torture methods, including shocking with electric batons, torture, locking sane practitioners up in mental hospital and injecting them with unknown drugs. Many practitioners were held in concentration camps and had their organs harvested while they were still alive."

Mr. Song called upon people of conscience to work together to end the eleven-year-long persecution.