(Clearwisdom.net) Falun Gong practitioners in Sweden gathered in front of the Chinese Consulate in Gothenburg on April 24, 2010, and the Chinese Embassy in Stockholm on April 25, 2010 as they did in previous years. They held rallies to mark the eleventh year of Falun Gong practitioners' efforts to resist the persecution. They also explained to people the historical facts about the April 25 peaceful appeal in 1999, and called attention to the brutal persecution of Falun Gong 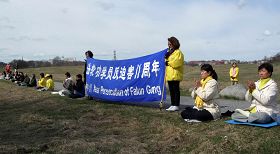 Practitioner Mr. Li Zhihe, former Beijing resident, remembers the April 25 appeal. He shared the following through a loudspeaker: "I had been a solider and can tell you that the appeal was definitely not an act of people who were trained or coerced into participating, but a noble and sincere act of people whose level of conscience had risen by following the principles of Truth-Compassion-Forbearance. Some of us knew each other, but most of us did not know each other. We all shared the same concern, that is, to reflect the true situation of Falun Gong to the Appeals Office so as to avoid further misunderstanding and mistreatment by the authorities. It was such a large number of people, but they stood there quietly, waiting for the result of the meeting between practitioners who volunteered to represent our group and government officials. There was no radical behavior, and neither did anyone shout slogans. No one made noises, the road was clean. Some practitioners even picked up the cigarette butts that police officers dropped on the ground and threw them away. There was not a single piece of of litter on the ground. Vehicles were often passing by with people, presumably police, inside videotaping the practitioners. The practitioners faced it with calmness, and the scene was peaceful and rational. It was really moving."

Mr. Li's wife Ms. Zhang Guirong missed the April 25 appeal because she was on an out-of-town errand. She said, "My husband and all participants of the April 25 appeal did the right thing. They nobly exercised their constitutional rights to state their concerns to the Appeals Office. They requested the authorities to allow them to have a peaceful environment to cultivate themselves to be good people."

Many People Show Their Support

Many passersby stopped to inquire about what had happened. A Swedish couple had a long conversation with practitioners. They were indignant upon learning that the CCP's brutal persecution of Falun Gong has persisted for eleven years. They said that they would tell more Swedish people about the senseless human rights abuses taking place in China.

Vehicles drove slowly while passing by the rally venue. Many people sitting in the vehicles made thumbs-up gestures to express their support, and many passersby took informational materials and expressed their sympathy and support for Falun Gong practitioners.

When two Swedish police officers on duty attentively listened to a practitioner's account of the persecution of Falun Gong, they were stunned. An officer kept making a thumbs-up gesture before leaving and said, "You're great!"

Encouraging Chinese to Quit the CCP

The gate of the Chinese Embassy was tightly closed during the rally. Some people were walking around inside the courtyard, and from time to time took photos of people participating in the protest.

Practitioner Ms. Zhang said, "We sincerely hope that they can hear what we are saying. The CCP's persecution of Falun Gong has been carried out illegally. Officials of different levels feel guilty, and many directives are circulated orally, because they know clearly that Falun Gong practitioners are good and kind people, but they act on the CCP's orders for the sake of their own personal interests."

Ms. Zhang finally advised the embassy staff to distinguish good from evil, and to withdraw from the CCP organizations and remember that Falun Dafa is good so that they will have a wonderful future.