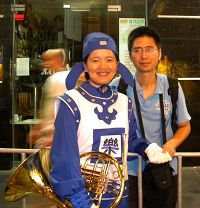 “Taiwan: "Thanks to Shen Yun Performing Arts for their performance in Yunlin!" (Photo)”