(Clearwisdom.net) Invited by the Chiayi County Government, the "Truthfulness-Compassion-Forbearance International Art Exhibit" opened at Meibei Elementary School in Meishan Township on April 20, 2010. Many VIPs attended the opening ceremony, including County Mayor Mr. Hongwen Liu, Chairman of the Board of the Meishan Culture and Education Foundation, Mr. Jianchang Zeng, the principal of Meibei Elementary School Mr. Zengyi Lin and the principal of Kouhu Elementary School Mr. Yanmen Wu. Hongwen Liu, County Mayor, said that the paintings were so true to life that one might believe they were photographs. He also urged more people to visit the art exhibit.

Meibei Elementary School principal Zengyi Lin said that he believed that the art exhibition will bring inspiration to teachers and students alike.

Executive Director of the Chiayi County Art Council, Mr. Guocong Li said that the exhibition is very valuable, giving people the opportunity to see highly accomplished artworks. He said that faith originates from human hearts, adding, "The paintings show that there are no human rights under Chinese Communist Party rule. It violates human nature." 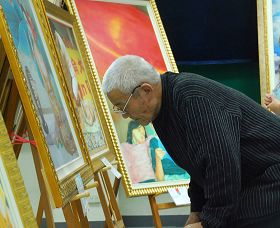 A senior resident looking at the paintings closely 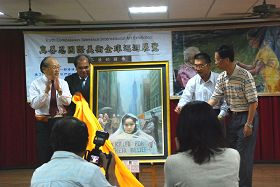 County Mayor Wenhong Liu and other community leaders at the exhibit's opening ceremony. 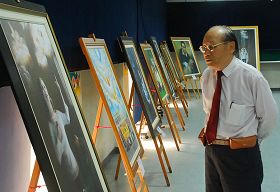 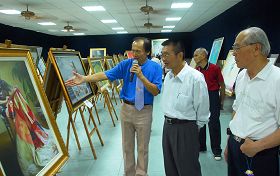 Principal Yanmen Wu of Kouhu Elementary School gave a speech at the opening ceremony. He said that the paintings carried a positive message. "Not only are the artists highly skilled, but they also bring the goodness and kindness of a high level cultivation practice," said Principal Wu. "The artists are all cultivators. They have very pure minds," Wu added. "But the most moving pictures are those showing the practitioners being persecuted. The artists used their understandings, personal experiences to depict the persecution. These are painted with blood and tears."

“Fuzhou City Police Break into Ms. Huang Meiying's Home in the Middle of the Night and Take Her into Custody”