Mannheim is the second largest city in the state of Baden-Württemberg, and is the cultural and economic capital of Rhein-Neckar-Dreieck. It is home to Germany's second largest river port and is the most important railway junction in the southwest of Germany. 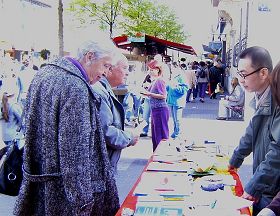 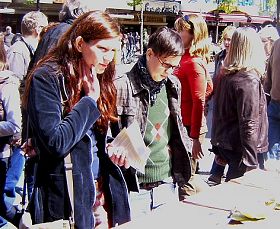 April 17 was a sunny day and the street was packed. Many people were out shopping and simply relaxing. Practitioners distributed truth-clarifying leaflets and talked to people about the practice of Falun Dafa, as well as the persecution and organ harvesting currently taking place in China. Meanwhile, several practitioners also demonstrated the five sets of Falun Gong exercises.

A woman from Shanghai approached the practitioners and asked if they had informational materials in Chinese so that she could take them home to read.

Many people talked to practitioners about the persecution and then signed a petition calling for international efforts to stop the Chinese Communist Party's appalling practice of harvesting organs from living Falun Dafa practitioners.

“Recite the Fa to Eliminate Fear”