Swedish MP: "We Should Reflect on What Life Is About" (Photos) 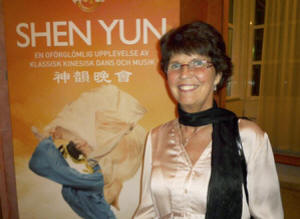 Although Conservative MP Mrs. Yvonne Andersson had been to China on a couple of occasions, she had never experienced anything like the traditional Chinese culture that Shen Yun presented in the show.

"I think it's great that they come over here and show us this. I'm immensely impressed by the dancing, the mystique, the cooperation on stage and the joy in the way they express themselves," she said.

Regarding the inner message of the show, she said, "I feel we should reflect on what life is about. Both the songs and the dances were food for thought for us, the listeners."

Being a firm proponent of human rights and freedoms, Mrs. Andersson has repeatedly raised these issues with the Chinese authorities, emphasizing the importance of freedom of speech.

Noting that the traditional culture expressed through dance and music in the Shen Yun show is not cherished in mainland China, she said, "It's a shame, because this is such a wonderful source of well-being and meaning. Through this show, we get a chance to explore many of the important questions in life."

In the song, A Thought, performed by tenor Yuan Qu, Mrs. Andersson felt that the words presented the listener with a choice, a choice of how they are going to live their life.

"It is your own choice how you use this opportunity. The choice is between leading a constructive and meaningful life or allowing yourself to get caught up in stress, a rat race, and spiritual poverty.

"I choose the positive!" said Mrs. Andersson with a laugh. "I live life and live near these questions. I find it exciting and it brings meaning to life."

The chief of enterprise and commerce in the Municipality of Linköping, Magnus Pettersson was fascinated by the traditional Chinese culture shown by Shen Yun. 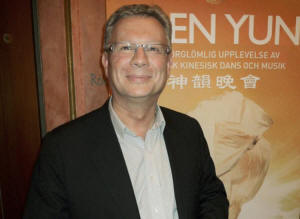 Although Magnus Pettersson, chief of enterprise and commerce in the municipality of Linköping, had been exposed to many facets of contemporary Chinese culture during his many trips to China, he felt that Shen Yun had opened up a "completely new dimension" of Chinese culture for him.

He found the show "incredibly strong." Mr. Pettersson said, "I missed, unfortunately, the show in Linköping last time because I was, at that time, in China."

Judging from the reactions of the audience, the Shen Yun Performing Arts Touring Company had again made a huge impression on the audience. 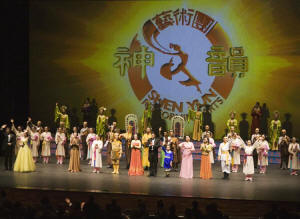 Curtain call at the Konsert & Kongress concert hall in Linkoping

Lars Haraldsson, a business executive at an international company, attended the show with his business partner, Lilly from China.

Both talked about how much they enjoyed and appreciated the show, but for Lilly, the impression was even stronger, as Shen Yun has yet to perform in China.

"Really a fantastic show! It is the first time I saw it and I shall surely see it again. It is filled with love and fantastic technique," said Lilly. 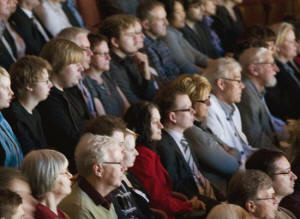 The audience at Kongress & Kongress on April 8

Marie Ferntoft, a marketing project leader who was also in the audience, thought the dancers were "beautiful and gracious." "The artists float forward, it seems. They are very skilful," she said.

Bjarne Nyroos, director of an international company and a world traveller, said he has a keen interest in foreign cultures.

"It is fascinating to see these dancers-the artists' proficiency. This is high art! The music, the animation on the backdrop, how they enter into the performance--excellent!" he said during intermission.

A welcome letter was sent by several members of the regional parliament congratulating Shen Yun and all the people who choose to come to the show to experience "a part of the multifaceted culture" of thousands of years.

"We in Sweden and the rest of Europe are fortunate, as we have the opportunity to see the performance-it is an opportunity the people in China do not have," the welcome message said.