On March 9, 2006, The Epoch Times published an interview with a senior journalist with inside information, who revealed that the CCP had set up a secret concentration camp in the Sujiatun District of Shenyang City in northern Liaoning Province that rivaled those of Nazi Germany. Held in the camp were thousands of Falun Gong practitioners. [60] On March 17, 2006, The Epoch Times reported an interview with a female witness who worked at the Liaoning Provincial Thrombosis Hospital of Integrated Chinese and Western Medicine. She presented further evidence that the concentration camp was located underground, beneath the hospital. [61] When live organ harvesting took place, her husband at the time, a chief surgeon, participated in removing corneas from living Falun Gong practitioners. On March 31, a letter from a veteran military doctor was published in The Epoch Times confirming the existence of the underground concentration camp in Sujiatun District, Shenyang City. [62] By then, the dark curtain over the CCP's live organ harvesting atrocities had been lifted.

Following the initial live organ harvesting reports, several overseas organizations started to make telephone investigations. Presenting themselves as people seeking consultations for their relatives who might need organ transplantation surgeries, the investigators called organ transplant sections in numerous hospitals across China. They specifically asked whether the hospitals were able to acquire organs from Falun Gong practitioners. These investigations further validated the allegations that Falun Gong practitioners were killed for their organs.

Independent investigators David Kilgour, Canada's former Secretary of State for the Asia-Pacific region, and David Matas, an award-winning international human rights attorney, published the transcript of a telephone conversation with Lu Guoping, a surgeon at the Nanning City Minzu Hospital in Guangxi Autonomous Region in Bloody Harvest - Report into Allegations of Organ Harvesting of Falun Gong Practitioners in China. During the conversation, Lu acknowledged several times that Falun Gong practitioners were the source of organ supplies. He said, "Some are from Falun Gong. Some from families of patients." 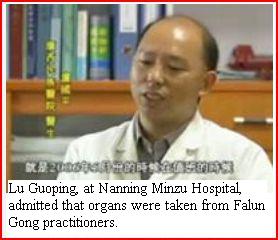 The following is an excerpt of the conversation between Lu and an investigator:

Investigator: Then did your classmate tell you that the [organ transplantation] operations they performed were all [with organ sources from] Falun Gong, is that right?

Doctor Lu: Some are from Falun Gong. Some from families of patients.

Investigator: Oh. Then if I want to find this type for my child, this type [of organ] from Falun Gong, do you think he can help me find any?

Doctor Lu: He definitely can find it for you.

Investigator: What you used before [organs from Falun Gong practitioners], was it from detention center[s] or prison[s]?"

Investigator: From prisons? And it was from healthy Falun Gong practitioners...?

Doctor Lu: Correct. We could choose the good ones because we assure the quality in our operations.

Representative of the Chinese People's Liberation Army No. 307 Hospital brokered for kidneys from Falun Gong Practitioners

During the investigation, World Organization to Investigate the Persecution of Falun Gong (WOIPFG) investigators contacted a broker representative of the Chinese People's Liberation Army No. 307 Hospital in Beijing, in the name of helping family members and friends to find suitable kidneys for their transplant requests. The contact lasted for several weeks and the conversation time totaled several dozen minutes. WOIPFG has compiled a complete record of the conversations and other forms of evidence. If any interested organizations or individuals need further information, please contact WOIPFG. This report will be updated as new evidence becomes available in the future.

Investigator: then you go ahead and help me check it out, whether....

PLA No. 307 Hospital Representative: That's right, we did two cases. The prison told us they did that with Falun Gong. I also told that lady that we indeed performed such operations. Now, however, it is getting more difficult than before.

Investigator: Where did you find the kidney sources before?

PLA No. 307 Hospital Representative: From Xicheng District [in Beijing].

Investigator: Alright, besides it, how could you be so sure he (the source) was a Falun Gong practitioner, did you find out for sure?

Li Honghui, a director of Yuquan Hospital, or No. 2 Affiliated Hospital of Tsinghua University, admitted that organs were taken from Falun Gong practitioners

On April 28, a Sound of Hope journalist made contact with Li Honghui, director of the Kidney Transplant Department, Yuquan Hospital, also known as No. 2 Affiliated Hospital of Tsinghua University. Li admitted that organs were taken from Falun Gong practitioners.

Li Honghui: It happened that for the past several years that donor organs were from Falun Gong practitioners.

Investigator: Do you mean that this type of donor was quite easy to get several years ago? 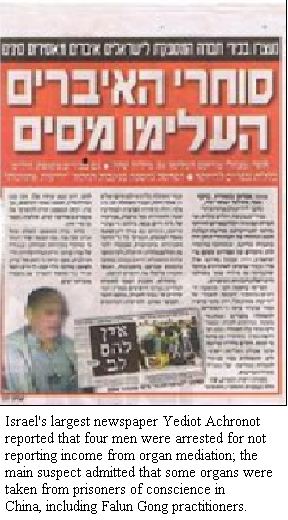 On November 17, 2006, Yediot Achronot, Israel's largest newspaper, reported that four men accused of pocketing millions of dollars that patients had paid for organ transplants were arrested in Israel. Yaron Izhak Yodukin, CEO of Medikt Ltd. and his associates, faced charges of not reporting incomes earned by mediating organ transplants for Israelis in China and the Philippines. The arrests followed months of investigation after the main suspect admitted to an Israeli newspaper that the organs were coming from Chinese death row inmates and prisoners of conscience, including Falun Gong practitioners.

4. Testimony from Falun Gong practitioners and other inmates

Many Falun Gong practitioners released from labor camps and prisons recounted that they were taken for blood tests while in custody. In July 2008, David Matas, co-author of Bloody Harvest, located someone released from a prison in Jiangsu Province, who is not a Falun Gong practitioner. Between March 2005 and early 2007, he was taken to 17 different prison cells. Inmates who had been held several years in the cells told him that over the course of 2002 and 2003, at least two or three Falun Gong practitioners in each cell were killed for organs. A video production, Between Life and Death, produced by New Tang Dynasty Television, published the telephone interview with this witness. [65]

David Kilgour and David Matas published the results of their extensive investigation in their report, Bloody Harvest. According to data in the public domain, the authors argued that the source of 41,500 transplants for the six-year period of 2000 to 2005 is unexplained. When they first published their report in July 2006, they had gathered 18 elements of evidence to substantiate the charges of the CCP's organ harvesting atrocities. When the revised edition of the report was released at the end of January 2007, the evidence had increased to 33 elements. The authors have traveled to over 40 countries around the world to report the results of their investigation, while continuing to gather new evidence. [66]

In November 2009, Seraphim Editions, a Canadian publisher released a revised, book form of Bloody Harvest: The killing of Falun Gong for their organs. This is the third edition of the investigative report by Matas and Kilgour. It now lists 52 different elements of evidence. Mr. Kilgour pointed out that although no element of evidence alone can prove the crime of live organ harvesting, all of the evidence combined almost irrefutably proves the allegations.

“Vice-President of Kimono Institute: "The Colors in Shen Yun Shows Are Perfect" (Photos)”