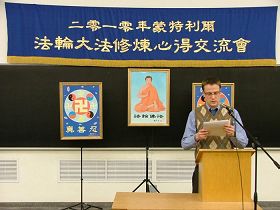 The hosts first expressed the highest respect and kind regards to compassionate great Master on behalf of all in attendance. They spoke of gratitude to revered Master's mercy that enables Dafa disciples to be together with Dafa, revered Master and Fa-rectification, to become Fa-rectification period Dafa disciples, to shoulder our sacred mission to save sentient beings. They also expressed that practitioners must cherish the cultivation opportunity to form a harmonious single body to do better in saving sentient beings.

Practitioners shared their cultivation experiences, relating their stories of looking within and detecting and abandoning their attachments, and talking about their steadfastness in the Fa while passing tests and tribulations.

Felix told of his cultivation experience in participating in promoting Shen Yun. He said that the process of participating in promoting Shen Yun was one of letting go of his attachments. It strengthened his endurance and removed human notions. While coordinating ticket sales, he had an opportunity to better understand other practitioners and to let go of his attachments. He said when he coordinated group tickets, no matter how the other party reacted, his mind remained unaffected. "When making phone calls, I paid attention to my righteous thoughts and tone, used my energy to open their hearts and awakened them to come to see Shen Yun performances."

He said that he wanted to change jobs last year. "My new company is a big one used to coordinate group tickets. And the company is located just near the subway where I distribute the Epoch Times newspaper weekly. Everything has been arranged perfectly, I only need to walk righteously on the path of my cultivation. "

Katha talked about the importance of forming a one body during the promotion of tickets for Shen Yun performances. She said, "I was full of energy in my mind. I could smile all day long, because it came out of my heart. Many times I would be delighted to introduce Shen Yun to everybody passing by me. Of course, I would be more delighted if they bought tickets. I felt that our team could complement each other, and the atmosphere was serene and peaceful. I felt that we are the one body, and on many occasions, I could feel strong energy fields."

Mr. Wei works in Shen Yun marketing as well. He shared his experience on how to balance the relationship between his work and family during ticket sales for Shen Yun. He stressed that helping with the Shen Yun project revealed his deeply hidden attachments. He spoke of how he treated his sickness karma interference with righteous thoughts and did not let it interfere with his ticket sales for Shen Yun.

Jean-Philippe is a new practitioner. He told of how he got rid of his bad habits through the practice of Falun Gong, letting go of negative relationships, and witnessing the supernormal characteristics of Falun Dafa. He said, "I chose to address the facts about Falun Gong as the subject for my speech prior to my graduation. At the beginning, I was worried that I may not be able honor this holy Fa, I wanted to give up, but later on I strengthened my righteous thoughts. It turned out that at the end of my speech, I heard my classmates say that my speech was great. My professor congratulated me, and gave me a full score. I asked my professor why he gave me such a high mark. He said that the mark was not that important, but the speech was really very good."

Ms. Zhang talked about how she helped people learn that Falun Dafa is good and about quitting the Chinese Communist Party. She did so while running a retail shop.

A practitioner who just started the practice one year ago shared that she did not know how to look within at the beginning. However, after having gone through various tests and tribulations, in the process of constantly assimilating to the Fa and understanding the Fa, she gradually came to realize how to cultivate. Speaking of the tests of sickness karma and the test in family, she said, "While passing the test, I came to realize the importance of studying the Fa well. Whenever my human thoughts popped up, and when I felt sad, studying the Fa could always help me build up my righteous thoughts. "