(Clearwisdom.net) The giant search engine Google announced on March 23, 2010, that it will stop the "filtering" censorship of its search engine service required by the Chinese Communist government, and move the service out of mainland China to Hong Kong. The Chinese Communist Party media mouthpieces began rallying together and attacking Google immediately. The speaker from the CCP State Council News and Internet Bureau expressed his opinion, "We are firmly against turning a business matter into a political one," and emphasized, "Foreign companies doing business in China must obey Chinese laws." 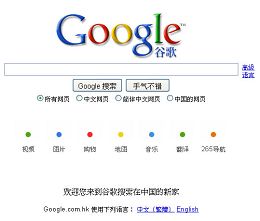 Google has stopped its google.cn search engine and "filtering" censorship, and its web link now leads to Google.com.hk.

The CCP has always mandated, "filter the harmful information" as an excuse to censor the Internet. The problem is you can't find exact definitions in the legal system of what is "harmful information." What kind of information will be filtered out is secretly decided by CCP authorities, and has nothing to do with the law.

Let us take a look at the filtered-out keywords. Besides a few pornographic words, most of the words filtered out are completely based on political considerations, for example, "Jiang Zemin" is a key word that has been filtered out. A normal search engine will show a number of articles which expose Jiang's corruption and depraved personal life, and his persecution atrocities, and this does not go along with the CCP's "Great, Glorious and Righteous" image portrayed by the CCP's political propaganda. "Tiananmen" is another key word filtered out, because the CCP is afraid of exposing the Tiananmen massacre twenty years ago which was directly directed by the CCP. The term "Falun Gong" is also filtered out, because a normal search engine will display numerous positive articles about Falun Gong and the Falun Gong books, which are forbidden in China. The CCP's persecution of Falun Gong will be described in some articles and this information is obviously unfavorable to the CCP's reputation.

While the CCP claims it is "firmly against turning a business matter into a political one," in actuality Google is refusing continued involvement in the CCPs' political matters, by refusing to cooperate with the CCP to deceive and hide the truth from Chinese citizens. As a matter of fact, the decision made by Google is non-political, but the CCP flew into a rage due to humiliation. For a similar reason the CCP is furious that 70 million Chinese citizens have quit the CCP, and tries to seal off and suppress the spread of the "Nine Commentaries on the Communist Party," because the CCP is afraid that Chinese citizens will no longer accept the CCP policies.

The CCP's concept of politics is not true politics, has nothing to do with public affairs, or citizen's rights, and only functions to maintain power. After several years of struggle, Google finally understands the nature of CCP politics, and wants to distance itself from it to keep a clean name.