(Clearwisdom.net) On the afternoon on March 20, 2010, volunteers from the Service Center for Quitting the Chinese Communist Party (CCP) held a rally in Chinatown to support the 70 million Chinese who have quit the CCP and its affiliations. The Divine Land Marching Band, which is made up of Falun Gong practitioners from Montreal and Ottawa, performed at the rally to celebrate the spiritual awakening of the Chinese people. Those who have already quit the CCP came to the rally to call for more people to join the trend. 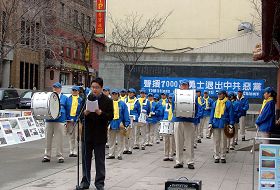 The Divine Land Marching Band made up of Falun Gong practitioners performed at the rally to celebrate the spiritual awakening of 70 million Chinese people. 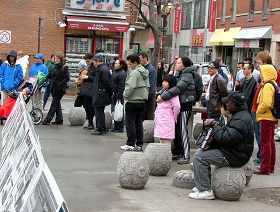 Local residents at the rally learned how the Chinese communist regime suppresses people.

During the rally, passersby stopped to listen to the speeches and learned how the CCP has plunged its people into the depths of suffering. Some read the fliers about how the CCP persecutes Falun Gong practitioners.

Mr. Wu, who had just left China, spoke at the rally. He expressed his support and respect for Falun Gong practitioners who persistently and peacefully protest the persecution. "My conscience is telling me that I support Falun Gong," said Wu.

Wu believed that quitting the CCP was the only way to avoid tragedy. He used incidents that have happened in China to expose the evilness of the CCP and told how high ranking officials in the Party collude with underground society to embezzle money and gain political power.

"The CCP itself is the largest underground society and quitting it will benefit the Chinese people and restore order in the world," he said.

Mr. Li, who immigrated from China a long time ago, came to the rally because of a special feeling, knowing that 70 million of his former fellow countrymen and women had quit the CCP. "I thank the volunteers from the Service Center for working night and day by the phones," Mr. Li said as he bowed to the volunteers.

Mr. Li talked about how the CCP has caused 80 million unnatural deaths in China in the past 60 years. "The CCP suppresses its people and uses lies and violence to destroy traditional Chinese culture and morality. It is the biggest enemy of freedom, democracy, and belief. We must say no to it."

Mr. Li said that he often told people to read the Nine Commentaries on the Communist Party so that they could understand what the CCP really was.

“Distinguishing Good from Evil, Justice Is on People's Minds”