(Clearwisdom.net) On the morning of March 13, 2010, Falun Gong practitioners participated in the 159th St. Patrick's Day parade in San Francisco. The practitioners' procession was warmly welcomed by the spectators and the parade organizer. 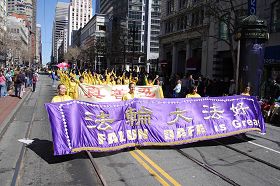 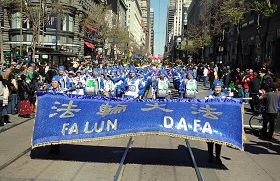 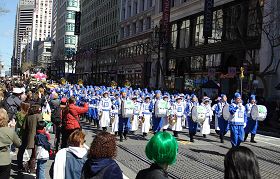 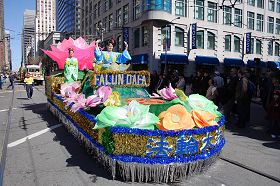 Among the 150 groups in the parade, the Falun Gong procession was unique. It included the Divine Land Marching Band, an exercise demonstration, and a float. Several hundred thousand people watched the parade.

As the band marched by playing "Falun Dafa Is Good," San Francisco resident Alison applauded enthusiastically. She said that the band's performance was wonderful. When she learned that the principles of Falun Gong are Truth-Compassion-Forbearance, she said, "Wonderful. It is truly wonderful."

The parade organizer said he was impressed with the Divine Land Marching Band. He expressed appreciation for the band's being a part of the St. Patrick's Day parade.

“Assimilating to Dafa and Making Advancement in Cultivation Together”