(Clearwisdom.net) Since July 1999, the Chinese government has carried out the unprecedented persecution of Falun Gong. During the eleven years of persecution, millions of Falun Gong practitioners were detained in forced labor camps, brainwashing centers, etc. The data collected from the eleven years of persecution also reveals how the Chinese government has used mental hospitals to persecute its dissidents and has systematically used nerve-damaging chemicals to inflict pain, forcing medical professionals to become accomplices of the persecution. 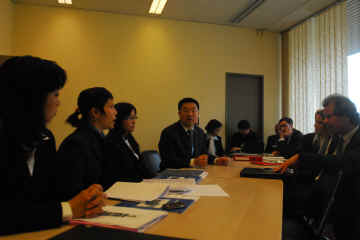 Ms. Siyi Fang tells how she was injected with psychiatric drugs during her incarceration in China, while UN Special Rapporteur Professor Manfred Nowak listens. 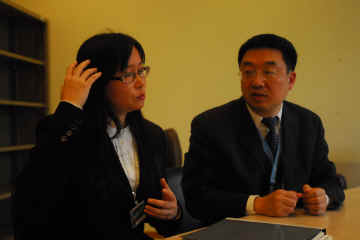 Ms. Huimin Wang describing the effect of the medicine she was forced-fed while detained in China.

On March 11, 2010 during the 13th UN Human Rights Council Conference, the Falun Gong Human Rights Working Group (FLHRWG) presented a compiled list of medical facilities, including hospitals, mental institutions, and clinics that had participated in persecution to the United Nations Special Rapporteur on Torture. Professor Manfred Nowak and his staff met with three of the victims of torture and listened attentively to their account of tortures they suffered and witnessed. Representatives of FLHRWG presented collected data on tortures committed against Falun Gong practitioners as well as hospitals involved in medical torture and made specific recommendations for measures to hold the perpetrators accountable.

1. Three victims of torture recounted their experiences to the Special Rapporteur

Three Falun Gong practitioners, Ms. Xuan Mei, an erhu soloist from Shen Yun Performing Arts, Ms. Huimin Wang, artist and vice director of the Department of Art Editing of Huangcheng Press, and Ms. Siyi Fang, a make-up artist from China, together with representatives of FLHRWG, had a dialogue with the Special Rapporteur and his staff. The office of the Special Rapporteur on Torture received hundreds of well-documented persecution cases during the past few years and went through tremendous difficulty to arrange a site visit in 2005. Now, during the UN Human Rights Council Conference, they had the opportunity to listen to the detailed firsthand accounts of tortures Falun Gong practitioners suffered.

Ms. Xuan Mei was an accomplished musician in China. Before she escaped to the US, she was repeatedly taken into police custody by force simply for practicing Falun Gong. She was detained for seven days in July 1999. Since then she was taken away several more times. The second time for forty-two days, the third time for sixty days, and the fourth time for seventy-five days. She still refused to relinquish her belief in Falun Gong, and was sentenced to four years of imprisonment after a show trial. During the 75-day detention in 2001, she was deprived of sleep while shackled to a chair.

Ms. Fang, who lives in Finland now, was tortured between April and July in 2001. Secret agents of the Jilin 610 Office and the Number 465 army division injected her with unidentified drugs, which led to shock, tongue stiffness, slower heartbeat, mental and physical agony, hallucination, and blurred vision. The CCP's doctors even wanted to conduct surgery on her, but her family members arrived in time and refused to sign the agreement, so the surgery was canceled.

Ms. Wang was arrested 7 times in China for her practice of Falun Gong. She held a hunger strike for four months to protest the CCP's persecution. She was force-fed with unknown drugs, which led to masculine changes, such as an enlarged Adam's apple, facial hair, and dark hair on her limbs. She was deprived of sleep for nine consecutive days with only one hour of sleep each day. She was confined in a room for three days and subjected to constant loud noise. She almost collapsed.

Since the UN Human Rights Council had asked the Special Rapporteur to pay attention to psychiatric torture, the FLHRWG had compiled a report of 1088 of cases of Falun Gong practitioners who suffered tortures that involved injections with psychiatric drugs. They identified over 200 hospitals that administered such tortures. Part of the reason the world did not pay attention to this issue is that the victims may have appeared normal on the surface, but people could not see the damage done internally. These drugs can be called mind-killing medication. The medical practitioners who participated in these acts are criminals. FLHRWG asked the Special Rapporteur about how to stop these criminals from traveling abroad and denying their entry because they are criminals. The hospitals engaging in such practices should be banned from publishing scientific publications. There are more and more cases of medical doctors getting involved in torturing Falun Gong practitioners. FLHRWG suggests the Human Rights Council to have a Special Rapporteur dedicated to medical professionals' involvement in persecution because it is such a serious matter.

There are about one thousand victims of torture who escaped from China and are now living overseas. The Chinese government has been denying the torture and refused the Special Rapporteur's site visit request. FLHRWG suggested that since the Chinese government continues to deny the request of site visit, the UN should find ways to bring the torture victims to the UN so they can testify without fearing for their lives.

3. Suggestions made by the Office of Special Rapporteur on Torture

During the dialogue, the Special Rapporteur and his staff asked the victims and representatives of FLHRWG to file cases like these that have not been filed through urgent communication procedures. Even if the cases happened several years ago, the government is still under the obligation to investigate the cases and to report back. Even if they do not reply, something has already put into the reporting mechanism. This question has been put through to the Chinese government but never answered, this alone will be recorded for the world to see.

The Office of the Special Rapporteur on Torture made suggestions regarding the doctors who may travel outside China - how to hold them accountable. UN article No. 5 about extraterritorial jurisdiction should be applied. Article No. 5 gives member states the rights against torture. If the suspect of the torture travels outside the country, the receiving country should make an arrest of the person should someone file a complaint to the domestic authority of the receiving country. The domestic authorities are obliged to take the case under the provision of the UN convention against torture. The case has to be filed as a criminal case in the justice system when the person travels in that country. All the member states have the obligation to follow the UN human rights laws.

Since the Chinese Communist Party started the persecution of Falun Gong, physical and mental tortures have been widely used on Falun Gong practitioners to force them to give up their beliefs. In his report on his mission to China in 2005, the Special Rapporteur on Torture stated that 66% of the cases of alleged torture that he has received were those against Falun Gong practitioners.

The cases submitted by FLHRWG are compiled from those that are published on the Minghui website. Falun Gong practitioners in China take great risks to submit to Minghui their firsthand information.

“The Cultivation Experience of a 73-Year-Old New Practitioner”