(Clearwisdom.net) On the afternoon on March 17, 2010, the Taiwan Falun Dafa Association and the Global Service Center for Quitting the Chinese Communist Party (CCP) held a press conference and a parade in one of the busiest part of Taipei.

The parade in front of the Presidential Palace in Taipei on March 7, 2010. 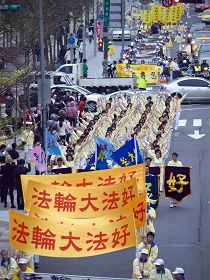 The parade to support the 70 million who have quit the CCP.

After the Epoch Times published a series of editorials--the Nine Commentaries on the Communist Party--in November 2004, people began quitting the CCP. As of now, close to 70 million people from China have quit the CCP and its affiliated organizations.

The stirring melodies "Falun Dafa Is Good" and "Falun King," presented by the Divine Land Marching Band, launched the activities. The band is composed of 200 Falun Gong practitioners.

The president of the Falun Dafa Association, Chang Ching-Hsi, spoke at the press conference. He pointed out that the CCP has been a violent and deceptive political party since it was founded 80 years ago. The "Tiananmen Self-immolation" staged by the CCP on January 23, 2001, to frame Falun Gong is a typical example that shows how the CCP will do whatever it takes to lie to its people to stay in power, according to Chang. He also quoted from David Kilgour's book that condemns the harvesting of organs from living practitioners and illegal organ sales directed by the regime, calling it "an unprecedented evil not yet seen on earth." 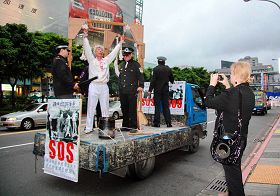 "So that more people can be made aware of the evil nature of the regime and not go down with it, we must wake up those who still have hope and expectations for the regime and help them quit the CCP," said Chang.

Hung Nien-Tsu, a representative from the Service Center for Quitting the CCP, also urged the Chinese people to wake up. He pointed out that 80 million people have died unnatural deaths since the CCP took power. The CCP has been terrorizing and suppressing its people by killing them. "Being part of the CCP means one is also guilty of every crime the CCP has ever committed. To have a future, they must quit the CCP," said Hung.

Hung said that, since the Service Center was established in February 22, 2005, it has helped 70 million brave souls to awaken. People all over the world have started becoming aware of the crimes the CCP has committed. Officials who have actively participated in persecuting Falun Gong followers have been prosecuted or even indicted for committing crimes of genocide and torture by courts around the world. The CCP is bound to pay for what it has done sooner or later, said Hung. 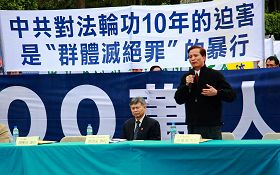 Kao Chien-Chih, Deputy Secretary of the Democratic Progressive Party, said that the CCP has never stopped suppressing its people. "In recent years, the economy in China has improved, but the persecution of human rights, democracy, and religious freedom is still ongoing. It's important that people understand the CCP's evilness," said Kao.

At the end of the press conference, the host played an audiotape released by the Coalition to Investigate the Persecution of Falun Gong. In the tape, a witness described how the staff in a prison camp or a state-owned hospital removes organs from living Falun Gong practitioners. The information silenced many at the conference.

Led by the Divine Land Marching Band, the parade left after the press conference ended. The route stretched over four miles and went through busy commercial areas, scenic locales, school districts, and the central government district. 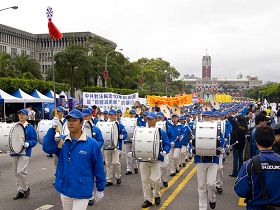 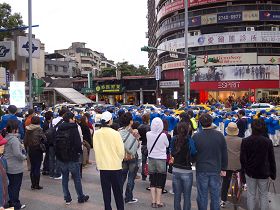 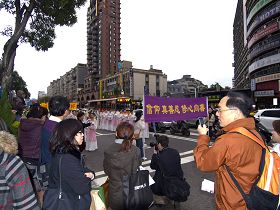 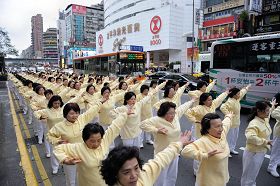 Practitioners demonstrated the exercises in the parade. 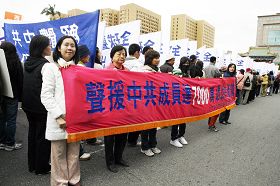 Ms. Li (left) came from out of town to support the activity with her mother, sisters, and son.

Ms. Li Su-Hsing from Yilan County is a dentist. She brought her family to participate in the meaningful activities. She wished her presence would help more people see the CCP for what it really is. Seeing the close interaction between the two neighboring countries, Ms. Li hoped that the people in Taiwan would not to be deceived by the CCP's media and lies. 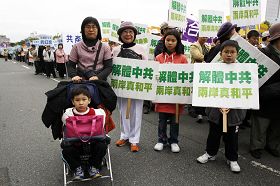 Ms. Huang (left, back), her mother-in-law, husband, and three children came to support the activities.

Ms. Huang Chao-Ru lives in Taipei. She brought her family to the event. She called for the CCP to stop the persecution. She and her husband often go online to talk to people in China about the facts of the persecution of Falun Gong.

Ms. Lu came with her mother. Four years ago she went to Boston in the United States to attend a similar activity and helped to publicize the horrendous crime of the sales of organs from living Falun Gong practitioners. She was moved by the meaningful activity and wished more people could learn what is happening to practitioners in China.

The parade ended at six p.m.

“Engineer Mr. Bao Yuanjing Abused and Tortured in the Yunnan No.1 Prison”