(Clearwisdom.net) On the afternoon of February 16, 2010, a French court in Paris began adjudicating an incident in which a tourist from mainland China violently attacked a volunteer at a local Quit the CCP Service Center. The judge announced that the first judgment would be given on the 24th, and the defendant's passport was withheld. The judge also announced a series of prohibitions against the defendant from the 16th to the 24th of February. 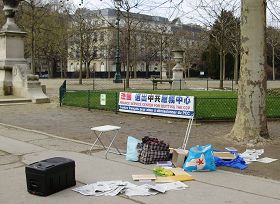 On February 15, Mr Cheng was working as a volunteer for the Quit the CCP Service Centre in Paris, France. The Service Centre, setup on a local sidewalk close to the Eiffel Tower, plays recordings and distributes materials encouraging people to quit the CCP. The materials show how the CCP persecutes the Chinese people and Falun Gong practitioners. At one point, a group of Chinese tourists verbally abused Mr Cheng. One of them assaulted Mr. Cheng with a large stone, hitting Mr Cheng on the head and leaving him with a five-centimetre-long wound that came close to his eye. The assailant then overturned the table with materials and speakers on it before being subdued and arrested by French police who rushed to the scene. 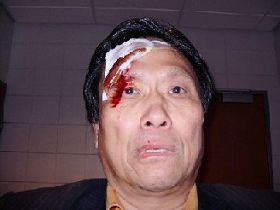 The Quit the CCP Service Centre routinely sets up near the Eiffel Tower all year round, and has applied for and received official permission to do so. They have persuaded a great number of tourists from China to quit the CCP and its affiliated organizations. Thousands of Chinese people have quit the CCP at this location. 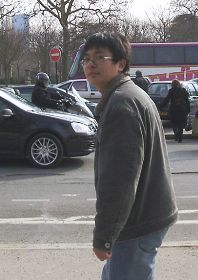 The assailant, Jia Yichao (Photo provided by the Victim)

The name of the assailant is Jia Yichao, a third-year student from Tianjin University. He admitted having struck Mr. Cheng with a rock. The judge announced that the first judgment would be pronounced on February 24, and also announced a series of prohibitions against the defendant, who was scheduled to return China on February 16. The defendant was ordered to submit his passport until the next hearing, and he was ordered not to leave France nor go near the site of the incident, nor to approach or contact the victim by any means.

A relative of the assailant said that in China, he had seen much CCP propaganda that stirred up hatred towards Falun Gong and that is why he was hostile to Falun Gong, even so far as to commit this physical assault with everybody watching.

According to Mr Cheng, while the defendant was committing physical assault, some people from the same tourist group were attempting to grab cameras and mobile phones from other Service Center volunteers. Mr Cheng believed that this violent incident was caused by the CCP's incitement of people's hatred toward Falun Gong.

The defendant's relative wanted to resolve the incident by paying off the victims. Mr. Cheng thought that the incident was related to people's hatred toward Falun Gong incited by the CCP. It was more than an attack against himself, so he refused the relative's request and asked the police to proceed and charge the student.

"The culprit is a college student. He dared to commit a crime in broad daylight in a Western democratic country. This shows the murderous result of the CCP's brainwashing Chinese people and filling their heads with hatred. Humanity has been distorted and its basic moral conscience has been lost. From this case, people around the world should be able to see how the CCP exports violence and hatred overseas by using these brainwashed individuals."