(Clearwisdom.net) After Suwon and Changwon, the Shen Yun Performing Arts New York Company visited Daegu and will present a total of seven shows from February 25 to March 1. The Shen Yun shows continued to receive high remarks from audience members from all circles, including many performing artists.

After her parents mentioned the show to her, Ms. Jee Ahn Han came to Daegu all the way from Daejeon with her husband and children to watch Shen Yun. Ms. Han is the founder of Han Jee Ahn Dance School.

Ms. Han said that she originally did not hold much expectation, but after watching the show, she could not help but admire the excellence of the performance. She really wanted to express her appreciation with a standing ovation. Even sitting in her seat, she said that she raised her hands high up to applaud.
She said that generally performers spend lots of effort in order to show their skills during dancing. Once on stage, they are under tremendous pressure and sometimes they even appear as being tired. However, Shen Yun performers can dance so naturally and cheerfully even in such a lengthy performance process. At the same time, the skills they demonstrate and what is reflected from their soul look really nice. "I really wanted to stand up to applaud. Anyway, I applauded really hard."

The backdrop amazed Ms. Han. In South Korea, they normally use props. It is the first time that she has seen such a performance. "Using the backdrop as the base, the animation displayed brings a dynamic feeling," Ms. Han said, "At the same time, the coordination between the performers and the backdrop is really incredible. Looking from every perspective, the performance is profound and very good."

She said that if she were asked to describe Shen Yun in words, she would have to say it is "the consummation of art!"

Folk Music Preservation Association Chairperson: a pity if you missed the show

Ms Eun Ha Jung saw the performance by Shen Yun Performing Arts New York Company at Daegu's Citizen Center Grand Auditorium on Feb. 26. She said that this was the best show she had seen in her life and hoped that those engaged in the arts would come and watch the show. She said: "It would be a great pity if you missed the show. Artists will be very moved by the show." Ms. Eun, the chairperson of the Folk Music Preservation Association, was accompanied by an artist friend, who recommended the show to her. After watching the performance, she expressed her deep respect for Shen Yun: "The performers have done a great job. It was truly worthwhile making a trip to see such a wonderful show!" 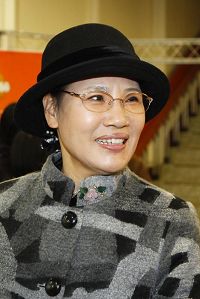 Eun felt that Shen Yun was the best she had seen in her life. She gave many compliments to the show:

"The show was clear cut, simple, it was the best show.

"The music, lighting and 3-D backdrop were excellent during the entire show. The music was extremely moving and the whole content of the show was also fantastic.

"The performers brought out their souls and immersed themselves completely in the dance.

This was the first time Ms. Eun saw Shen Yun. She liked every program in the show. She said, "It takes a lot of hard work to be so successful and have so many people involved in the show. I can't say which program is better than the other. All of them were good."

Ms. Eun thought that the dance and music amalgamated in such a perfect and harmonious way. In her words, "Because I am a musician, I pay a lot of attention to the music I listen to. The music and dance in Shen Yun are very harmonious, when the dance rhythms pick up, the music integrates very well with it. With the presence of the live orchestra, the feeling is very intense, as if one is immersed into the performance."

She added, "The female dancers are feminine and beautiful, thus the music used is soft while the male dancers dance with vigor, so the music from the live orchestra is strong and upbeat."

Renowned Vocalist: It shows the inner beauty of the artists

Mr. Chun Sung Whan, renowned vocalist and chief director of the Korean Performing Arts Promotion Association, watched the second Shen Yun Performing Arts show in Daegu, South Korea on Feb. 26. He said: "Shen Yun does a great job presenting the virtues of the Chinese nation. The combination of Eastern and Western musical instruments is perfect and the composition of all programs is spectacular. It shows the inner beauty of the artists very well." 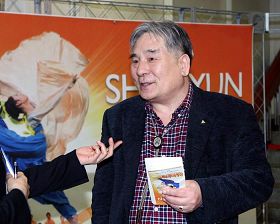 In regards to the orchestra, Mr. Chun said, "The Chinese and Western musical instruments are coordinated very well in the orchestra. The orchestra members have very good technique. They successfully lead the audience to experience the special charm of classical Chinese music. The conductor put in a lot of effort. Under her lead, the orchestra works seamlessly together. It was a job well done."

Mr. Chun was the Dean of the Music Department at the Catholic University of Daegu. In order to nurture more young musicians, dancers and artists, he is now engaged in the establishment of Performing Arts Promotion Association. Mr. Chun said, "I hope more artists in South Korea can watch the show. It would be great if Shen Yun could perform around the country, not only in Daegu.

"I think that professional dancers should watch the show often to get inspiration."