(Clearwisdom.net) From February 12 to 18, the Truthfulness-Compassion-Forbearance International Art Exhibit was held at the Galeri Cipta 2, near the Jakarta Academy of Music. 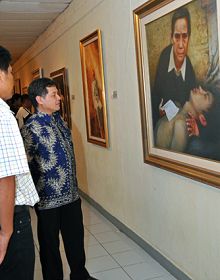 During the opening, held on the night of February 12, four invited guests gave opening remarks. They were Liman Kurniawan of the Indonesia Falun Dafa Association, Benny Halim of the True Creation Art Foundation, Muhammad Bachtiar, director of a local art museum, and Drajat, a director from the Indonesian Ministry of Culture. One after the other, the speakers praised the purity and beauty of the artworks. After the speeches, five young Falun Dafa practitioners demonstrated the sitting meditation.

One young painter was deeply touched by the painting "Embroidering Falun," which depicted an old lady embroidering a large Falun emblem on a banner at night. The details depicted in the painting impressed him, and he said that this painting was priceless.

Mr. Wito is the director of the Bale Lukis Arts Community and also a painter himself. He commented that the displayed paintings far surpassed his skill level and he felt the embedded messages of each painting. He said that the paintings were very touching and that he learned a lot from them.

Another painter said that he had never seen an exhibit of this kind, as it had a lot of spiritual content and each painting told a vivid story.

An art collector from Surabaya said that the paintings were world class. He said that there is a Falun Gong practice site near his home and he will soon learn the practice.