(Clearwisdom.net) In January 2010, the French Service Center for Quitting the Chinese Communist Party (CCP) held several events to support the lawsuits in Spain and Argentina against five high-ranking CCP officials responsible for the brutal persecution of Falun Gong in China. These events were held in Chinatown, at the Eiffel Tower and on Human Right Square in Paris. The activities caught the attention of large numbers of Chinese residents in France, Chinese tourists and visitors from across the Europe. 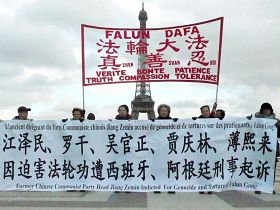 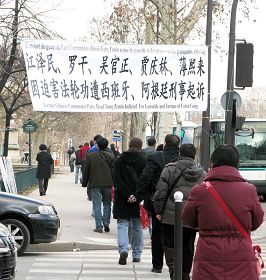 Chinese tourists passing under the banner 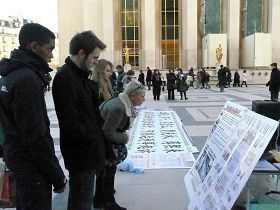 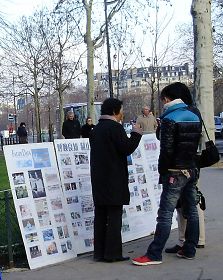 Tourists from China asking for more information about the CCP's persecution

'Jiang Zemin, Luo Gan, Wu Guanzheng, Jia Qinglin and Bo Xilai are being charged for criminal offenses in Spain and Argentina,' the banner announced. At the foot of the Eiffel Tower, there were many tourists from China who passed by the banner. Some of them read the banner out loud, and some took photos of the banner.

"Bring Jiang to justice. It's very interesting!" A young man from south China laughed and said, "Jiang is foolish and incompetent. He didn't do anything good for so many years when he was in power. But I didn't expect him to be charged abroad."

"It's the first time for me to learn that a country's leader is being charged abroad. This really is a free society!" An older man from Shandong Province said with a sigh. "I have lived for seventy years and experienced many things. What freedom there is abroad!"

On Human Rights Square, tourists from different countries read the display boards. Many people signed the petition to show their support. An old French man said loudly, "The Communist Party is very bad. They did lots of bad things in France. It's really wonderful that you can sue the CCP's high ranking officials in Spain and Argentina!" When talking about the Google-hacking incident and the latest news about the CCP's harvesting organs from living Falun Gong practitioners, a middle aged Frenchman said, "Bringing the dictator to the justice is being responsible to the whole world."

Some tourists from China were shocked when they read the banners. Many of them took informational materials and some read the display board carefully, though some were still afraid of the monitoring agents in their tour group and only read the boards when nobody was watching them. But there were some brave ones who declared their intention to quit the CCP and its affiliated organizations on the spot.