(Clearwisdom.net) On January 30, a rally was held in front of the Chinese Consulate in San Francisco, condemning the Chinese Communist Party (CCP) for exerting pressure on the Hong Kong government to deny the visa applications of six staff members in Shen Yun Performing Arts, which caused cancellation of the Shen Yun shows. The attendees also expressed support for the protest march "Protect Shen Yun; Protect Hong Kong" in Hong Kong on the same day. They requested the Hong Kong government to correct their wrong decision and invite Shen Yun back to Hong Kong. 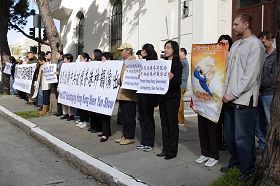 Ms. Zhang Xuerong, the organizer of the event, stated that the CCP has been trying to interfere with the Shen Yun show for a long time. For example, the Chinese consulate wrote to a theater in Little Rock, Arkansas, asking the theater not to hold Shen Yun show. The theater found the letter ridiculous, submitted it to the FBI and asked for an investigation.

Ms. Zhang said the CCP has done the similar things in Australia and Korea. It is obvious that the CCP is behind the incident in Hong Kong this time, although the foreign department of the CCP doesn't dare to admit it, because they still try to give people the impression that the basic law of "one country; two systems" in Hong Kong has not been ruined.

"All the attendees today have watched the Shen Yun show. They know how beautiful it is. The CCP ruined the traditional Chinese culture, and Shen Yun promotes the traditional culture. That is why the CCP is afraid of this show." Ms. Zhang said, "The CCP's consulate in San Francisco has threatened the singers and actors from China, and the Chinese community leaders not to watch the show. None of them actually listened to the CCP."

Ms. Zhang said that one of the purposes of the rally was to support the march with the theme, "Protect Shen Yun; Protect Hong Kong" that was held the same day in Hong Kong. "The Hong Kong people should be freed to watch the show," she said.

Lily, a Chinese dance teacher who has seen the Shen Yun show, came to the activity with her friends. She highly praised the show and condemned the CCP's behavior. She said: "The CCP will not always get its way. Art has no boundaries. Someday, people, who love art will have the chance to appreciate the Shen Yun show." She said: "Hong Kong is next to China. The CCP is afraid that if the show is held in Hong Kong, Chinese people can go there to see it. I hope someday the show will be held in China so that Chinese people will have the chance to see it too." 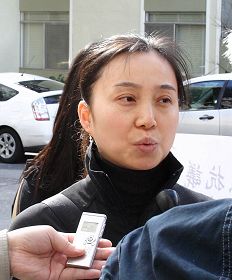 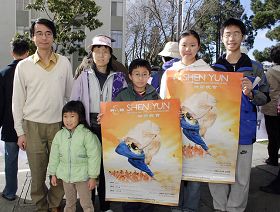 Ms. Wu Wei and her family

Ms. Wu's husband stated that he saw the Shen Yun show before, and was proud of the Chinese culture demonstrated by the show. He said that the Hong Kong people should fight for their freedom and human rights. "People all over the world can see that show. Only Chinese people cannot. They don't have this freedom. Now, the CCP has even deprived the Hong Kong people of their freedom. If they don't step forward, they will lose more."

Mr. Lin lived in Hong Kong for a long time. He expressed his disappointment. He said: "Through this incident, we see that the basic law of 'one country; two systems' is gone. It has become 'one country; one system." He hopes that the Hong Kong people will fight for their rights.