(Clearwisdom.net) On January 31, 2010, nearly a thousand people from all walks of life rallied in Hong Kong to protest the denial of visa applications of six key production staff of Shen Yun Performing Arts. Ms. Gao Yu, an independent journalist from Beijing and a two-time winner of the International Women's Media Foundation "Courage in Journalism Award," spoke of how she felt about the incident. 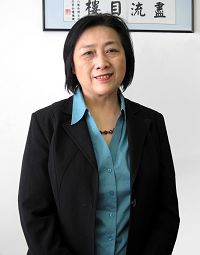 Ms. Gao thought of the incident as an "alarm for the seven million people in Hong Kong." She called on the people of Hong Kong to "resist the violation of freedom in journalism and speech, including art performances" like how they resisted Article 23.

Dr. Sun Wenguang is a retired physics professor from Shandong University. Mr. Sun said that Shen Yun expresses ideas through the form of art, and art should not be suppressed. "Shen Yun conveys people's concerns, and expresses people's imagination and beautiful expectations. The artists should be acknowledged and respected," said Dr. Sun. He pointed out that the Beijing authorities could be behind the Hong Kong government's decision to deny the visas.

Mr. Zhen Enchong is a human rights attorney from Shanghai. Mr. Zheng said that people in China are already watching Shen Yun's shows from the Internet and DVD's. "If people could vote in China, I am sure they would vote for Shen Yun to come to China. I would welcome Shen Yun to Shanghai." Mr. Zheng said that most people believe Shen Yun's shows reflect the exquisite culture of China's 5000 years of history. "People are sick of shows that are full of the party's propaganda. People would welcome Shen Yun," said Mr. Zheng.

According to Mr. Zheng, Shen Yun's contract with the event sponsors in Hong Kong was a business contract and the government's interference is illegal and groundless.

Mr. Zheng believes that the Chinese Communist regime did not want Shen Yun to bring certain messages to people in China. He expressed his hope that Shen Yun will continue making more shows, "Shen Yun's shows are like little cultural and spiritual bombs that are exploding in Hong Kong without ever getting there, and the shock waves are rippling to the Mainland."

Ms. Lu Xuesong spoke through a recording at the rally. Ms. Lu is a winner of the Lin Zhao Memorial Award and an instructor at the Jilin College of the Arts. She said that her expectations and trust for the Hong Kong government fell dramatically after hearing of the incident. "I am very concerned," said Lu.

Mr. Ma Xiaoming, a writer from Shaanxi Province, believed that there were political influences behind what happened to Shen Yun. He is looking forward to when Shen Yun can perform in China, "The expression of upright art and emotions cannot ever be diminished or blocked."