(Clearwisdom.net) On January 31, 2010, Sonntagszeitung, the second largest weekly newspaper in Switzerland, published an interview with a female Falun Gong practitioner in Germany. She talked about what she had witnessed in forced labor camps and about organ harvesting atrocities perpetrated against Falun Gong practitioners in China. The title of the article is 'I Died, I Died, and I Died----' 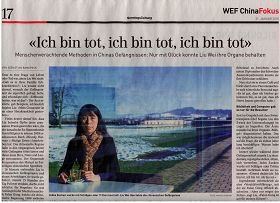 The interview in Sonntagszeitung

"Do you have any genetic disease in your family?" When asked by a doctor in the prison, she could never have imagined this was a question that would decide if she lived or died.

The article says: "Later, many events indicated that Ms. Liu Wei nearly became a victim of live organ harvesting. It was just like what David Kilgour, Canada's former Secretary of State for Asia-Pacific, described in Bloody Harvest, his book published in 2009 that affirms that the Chinese Communist regime killed a large number of detainees in the past few years and took their hearts, kidneys, and lungs. The seizure of these organs filled the gap between the demand for organs and the actual supply.

"Ms. Wei Liu spent sixteen months in different prisons and forced labor camps. In those days she was severely abused and tortured and was forced to weave jumpers by hand 15 hours a day. And she was subjected to sleep deprivation. The reason she was persecuted was because she practices Falun Gong, and Falun Gong has been banned by the Chinese Communist regime since 1999. Because Ms. Liu secretly copied and circulated some truth-clarifying fliers, she was arrested.

"'Nobody cared about my health in the prison,' Ms. Liu recalled, 'But I had to go to a doctor five times to have my body checked.' Her blood was taken and the doctor checked her heart and kidneys with Ultra-sound.

"Ms. Liu now believes that the results from those tests probably saved her life. She said, 'Fortunately, my organs were not of high quality.' She was released in 2003 and came to Germany one year later.

"David Kilgour believes there are two reasons that the regime has chosen Falun Gong practitioners as a source of organs. Firstly, because they do meditation, they are very healthy. They don't smoke or drink. They often do exercises (Falun Gong). The exercise was so popular in the 1990s that the regime felt threatened, so it lied and labeled Falun Gong an evil cult.

"For writing Bloody Harvest, Mr. Kilgour was awarded the Human Rights Prize by the World Human Right Organization in Bern, Switzerland. In the book, Mr. Kilgour used reports by prisoners who had been detained and other evidence to support his conclusions.

"Chinese speaking investigators also called hospitals in China. Posing as someone who needed an organ, the investigator asked for information relating to Falun Gong practitioners' organs. The doctors' replies were horrifying.

The involuntary seizure of organs from detained Falun Gong practitioners is still continuing in forced labor camps in China. When an investigator called the associated hospital of Xian University for information, he got a definite reply from a doctor. The doctor said, 'We care only about the quality of the organs, not the source of the organs.'

"'What's happening in China is unbelievable,' Franz Immer, the Chair of the Swiss Organ-Transplant Donor Foundation said. "Falun Gong practitioners became a living organ bank and were categorized under a specific heading. This bank has tens of hundreds of records. And each one probably implies a death."

"Ms. Wei Liu is lucky to be alive. The 37-year-old accepted the invitation from the World Human Rights Association and the Swiss Organ-Transplant Association and came to Bern to tell about her experience. Now she is sitting in a cafe. Staring at the winter scenery of Bern through the window, she said, 'It's great that I am able to be here. It's great that I could see Mr. Immer!'

"It's very possible those doctors found defects in her organs. That might be the reason she survived. While in detention, Ms. Liu was in very bad physical condition. She was constantly ordered to stand or sit still. If she moved even a little, she would get kicked and hit. She almost lost her nerve. 'Once I felt I'd already died, already died, already died----,' she said.

The interview says in the end, "Although there were clean toilets--even libraries and computer rooms--the prisoners were not allowed to use them, because those are for outsiders to see, to show how civilized China is becoming."