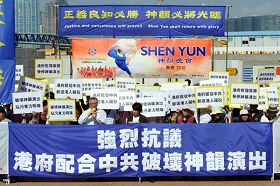 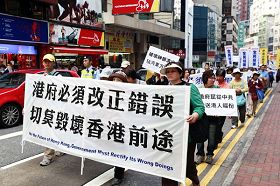 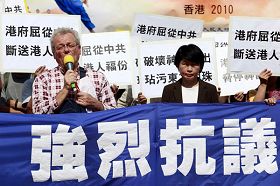 A supporter gives a speech at the rally 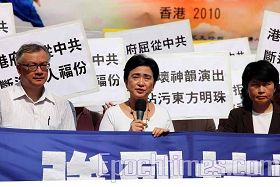 Several senators, political leaders, artists and religious leaders spoke at the rally. They pointed out that the government's wrong decision caused the cancellation of the show, and noted that the government hasn't given any good reasons for the denials of the visa applications. The rally called attention to the situation that the visa incident reflects how freedom and human rights in Hong Kong have been undermined by the Chinese Communist Party (CCP). They called upon the Hong Kong government to correct their wrong decision and invite Shen Yun Performing Arts back to Hong Kong.

Ms. Liu Huitsing, a Hong Kong senator and vice president of the Democratic Party, condemned the government for giving in to CCP pressure and interfering with the Shen Yun show. She pointed out that the government's behavior has damaged key values in Hong Kong: freedom, human rights, and the law.

Mr. Hsu advised the people of Hong Kong, "We should be aware of this kind of damage. We should even sue the government, so that traditional culture will be respected. We are shocked by this incident. We need to tell the Hong Kong citizens that we are in a dangerous environment, in which upright, traditional culture is not respected and is being damaged," Mr. Hsu said.

Szeto Wah, chairman of the Hong Kong Alliance in Support of Patriotic Democratic Movements in China, could not attend the rally. He sent a videotape, expressing his opinion. In the video, Szeto Wah said, "Hong Kong citizens were excited about the Shen Yun show. But now they are angry, because the government interfered with the performing arts and the shows had to be canceled. They are angry, also because the government gave in to the CCP and ruined the basic law of 'one country, two systems' in Hong Kong." 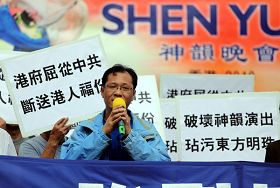 Vice president of the Hong Kong Alliance in Support of Patriotic Democratic Movements in China, Tsai Yaowah, giving a speech.

Several political leaders also stated that the government has deprived Hong Kong citizens of their basic human rights and freedom. They condemned the government for suppressing traditional culture by wielding political power. 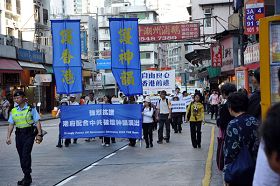 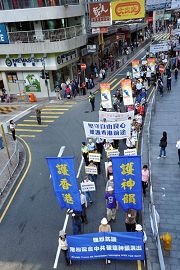 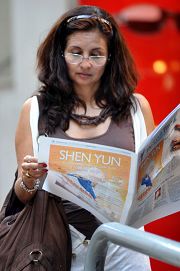 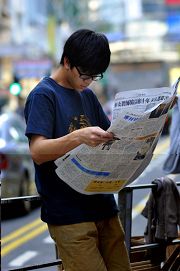 Ms. Li Weina, director of Shen Yun Performing Arts Touring Company, called in and expressed her appreciation to the people of Hong Kong for their support. Ms. Li said, "We are sincerely sorry that we had to cancel the shows this year, but we believe that in the near future Shen Yun will come to Hong Kong, expressing its gratefulness to the Hong Kong citizens with great performances."

She condemned the Hong Kong government's behavior and emphasized that Shen Yun tries to promote the original, traditional Chinese culture, which has been ruined in China by the CCP.

Ms. Li said, "Many Chinese people are proud of Shen Yun for promoting Chinese culture throughout the world. We regret that the people of Hong Kong are deprived of their right to see the show. We hope that Hong Kong citizens will stand up and protect their own basic rights."

Several artists expressed that they were very disappointed and angry at the Hong Kong government's action, because they were eager to see the show. 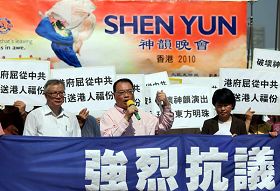 Mr. Shen Sihai, a TV show producer, said that Shen Yun would have a great impact on the arts community in Hong Kong. He pointed out that it takes a long time for members of a good performing arts company to practice and work together seamlessly, noting that it is impossible to temporarily substitute key personnel with people who are not familiar with the mechanics of the show. 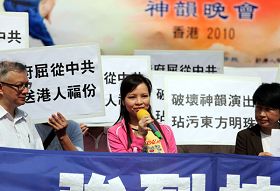 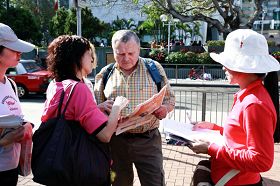 Some of the attendees at the rally were from China, who had bought tickets to the show, but were disappointed to hear about the cancellations. They said that they attended the parade to protect freedom in Hong Kong, and also to protect their own rights.

Mr. Liu Tiemin, a Hong Kong citizen, said, "It was a terrible decision. The CCP is afraid of the Shen Yun show, so it suppressed it. This is shameless behavior."

Mr. Liu continued, "The CCP is undermining freedom in Hong Kong, and the Hong Kong people should be aware of it. Standing up to support Shen Yun is actually standing up for ourselves."

Ms. Zheng bought four tickets for two shows. She said angrily, "It is horrible that the CCP even limits our freedom to watch a performance. We don't even have the right to watch a high level art show. I am afraid that we will lose more freedoms in the future. That is why I got up so early, joining the parade to express my anger. If we don't protect our rights, we will lose all of our freedom before we know it."

“Mayor of Baldwin, Florida: "It's Wonderful for Us to Have this Opportunity"”