(Clearwisdom.net) Citizens in Macao rallied in the center city on January 30, 2010 to protest the Hong Kong government's denial of visas to a number of Shen Yun Performing Arts' core production staff which resulted in Shen Yun having to cancel its seven shows in Hong Kong. The protesters asked the Hong Kong government to correct its mistake immediately and issue visas for the six production staff. 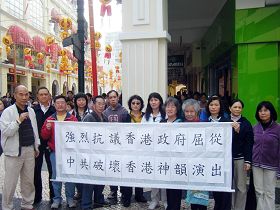 Democratic activist Mr. Li spoke about how the Hong Kong government sabotaged the "one country, two systems" and the autonomy of Hong Kong. "The Chinese Communist regime purposely made [Shen Yun's performance] a political issue and suppressed its performances in Hong Kong.

"Since Hong Kong and Macao were returned to China, their human rights and freedom have significantly regressed. The Chinese Communist regime continues to erode our rights and freedom," said Li. The protest was meant for citizens and tourists, especially those from China, to understand what the Chinese Communist Party had done to violate human rights. "I strongly condemn the Hong Kong government's groundless denial of Shen Yun's visa application."

Another protester, Mr. Lin said that Shen Yun has performed in over 30 countries since 2007 and entertained over 1.5 million people. Their shows are always highly welcomed and receive favorable reviews. Shen Yun's seven scheduled shows in Hong Kong were sold out in five days. Mr. Lin said, "Unfortunately, the Hong Kong government succumbed to the Chinese Communist regime's pressure and denied visa applications for six of Shen Yun's core production staff a week before the shows were scheduled to be staged. Shen Yun had no choice but to cancel all of its shows. The government denied its people's right to see a world-class show, and caused financial, psychological and time loss for the host and the performing group."

“My Cultivation Experience in the Management of a Newspaper”

“Mr. Liu Ruisheng Dies as a Result of Persecution”