(Clearwisdom.net) NEW YORK--Shen Yun Performing Arts took the stage at the famed Radio City Music Hall in New York City on February 14 to an enthusiastic crowd. Its third and fourth of seven shows were presented on the Chinese New Year, the first day of the Year of the Tiger.

Watching the evening performance was Mrs. Geng He, wife of Nobel Prize-nominated Chinese freedom advocate Gao Zhisheng, at Radio City with the pair's two children. Mrs. Geng escaped China to the United States in March 2009, following years of harassment and her husband's multiple abductions at the hands of the Chinese Communist Party. February 5 marks one year since Mr. Gao was last taken away by police. He has not been seen by his family, supporters, or any independent observers since. 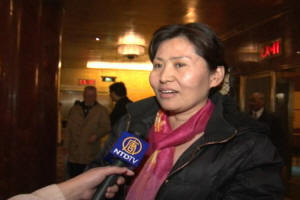 "I am very thrilled to be able to see this show today. It is very exquisite, very magnificent."

One act, "Drummers of the West," caused Mrs. Geng to reflect on her husband's, as well as her own, plight: "There was one program, a northwestern dance. When my son saw it, he said, 'Mom, I've heard this [kind of] music before in Daddy's car.' The backdrop showed a village that looked a lot like Gao Zhisheng's village in Shanbei [in Shaanxi Province]."

She was touched by the show overall--but her thoughts didn't stray too far from her husband.

"Really, I think everything was so beautiful, except my husband was not by my side. I still haven't heard anything from him," she continued, her voice shaking.

Mrs. Geng perceived the high level of dedication the Shen Yun performers have to realizing the production: "I could see that the performers have put in a lot of effort, over a long time, to put on such a show."

Mr. Gao is known for his hard work and dedication to the causes he champions. In 2001, he was named one of the country's top ten lawyers by China's ministry of Justice. But by 2005, he had written three open letters to top Chinese leaders and the National People's Congress, challenging the Chinese Communist Party's persecution of Falun Gong practitioners and other groups. Subsequently, CCP authorities closed his law practice, imprisoned him multiple times, and increasingly harassed him and his family.

On February 5, one year after his most recent abduction, supporters filed a petition with the United Nations (UN) Working Group on Involuntary Disappearances demanding Mr. Gao's release.