(Clearwisdom.net) On February 6, the Divine Land Marching Band from Sydney was invited to perform at the New Years parade held in Bankstown. Local citizens gave the band a warm welcome. 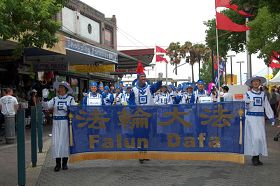 The band leads the parade.

The band led the parade. It performed Australia's national anthem at the beginning of the parade. The city government of Bankstown paid tribute to the band and invited them to perform first onstage.

A local TV station covered the parade. The host briefly introduced Falun Gong to the spectators.