(Clearwisdom.net) Recently the Hong Kong Immigration Department refused to issue performance visas for six key production staff of Shen Yun Performing Arts. The denial was issued three days before Shen Yun's scheduled flight to Hong Kong. As a result, Shen Yun had to cancel all of its seven shows in Hong Kong, of which the tickets had sold out in less than a week. Pressure by the Chinese Communist regime was said to be behind the decision of the Hong Kong Immigration Department. On February 5, 2010, the presenter of Shen Yun held a press conference in Brisbane and called on the Hong Kong government to amend its mistakes.

Professor Chwei-Liang Chiou is an honorary research consultant of the School of Political Science at Queensland University. He said at the press conference that Chinese Communist regime did not keep its promise to keep its hands off Hong Kong for 50 years. "The persecution of human rights is extended to Hong Kong," said Chiou, "We need to stand up against the Chinese Communist Party's violation of human rights." 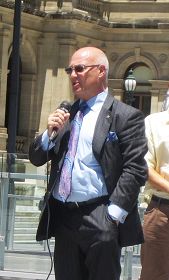 Ms. Zhao, representative of the presenter of Shen Yun in Brisbane, the Falun Dafa Association in Queensland, believed that the Chinese Communist Party did not like the fact that Shen Yun's shows were about China's 5000 years of traditional culture. Zhao said that it was important that people support freedom of expression in Hong Kong "because it affects the basic rights, freedom of speech and values of a civilized society."

Emmy from New Tang Dynasty Television spoke from a journalist's point of view, "We have witnessed that the Chinese Communist Party exhausted every means to influence the media's freedom in the west and to interfere with the freedom of expression through the arts in Australia. We must stand up, not just for Hong Kong but for the freedom of Australians in the future."

“Some Advice to the Practitioners Who Have Not Progressed Diligently”