(Clearwisdom.net) On January 23 and 24, several Falun Gong practitioners from Poland visited the second largest city in the country, Lodz, to introduce Falun Dafa.

Practitioners set up display boards and passed out flyers on Piotrkowska Street, telling people of the beauty of Falun Gong and exposing the brutal persecution of Falun Gong in China. Practitioners also did the sitting meditation, although the temperature was -20 degrees Celsius (-4 degrees Fahrenheit). Many people were happy to take the informational materials. 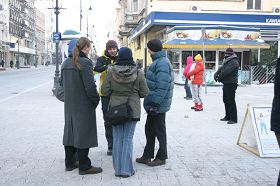 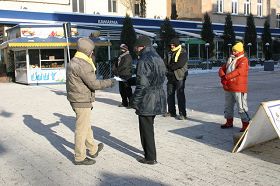 Clarifying the truth in the cold weather, in Lodz.

The next day, the practitioners went to a local mall to pass out flyers. They didn't know about the mall policies, so they didn't apply for a permit beforehand, and later were told that they had to stop. The practitioners then went to the mall office. They apologized and clarified the truth to the mall administration. The officers make an exception for them, and provided support. Practitioners passed out more than 1,000 copies of Polish flyers and 700 copies of Vietnamese-language materials.