(Clearwisdom.net) In April 1995, Falun Dafa was introduced to Taiwan. The practice stressed virtue and Truth-Compassion-Forbearance. It helped people improve their mental and physical fitness, and many benefited from the practice. Now there are about 700,000 people from all walks of life practicing Falun Dafa in Taiwan.

In the Shilin District in Taipei, the capital of Taiwan, there are many places that people like to visit, such as the Palace Museum, the Shilin Night Market, and the Shilin Chiang Kai-shek Official Residence. Falun Gong practitioners are always seen at these tourist attractions, introducing the practice and exposing the ongoing persecution to the tourists from China. 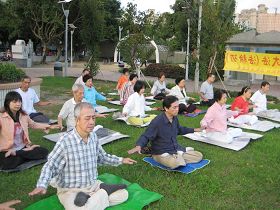 Falun Gong practitioners exercise in the morning in a park 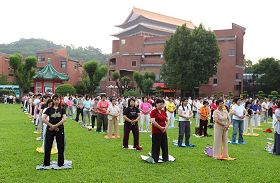 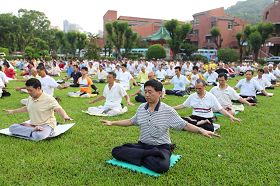 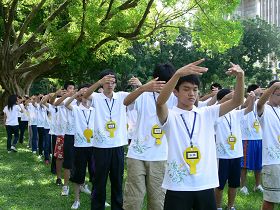 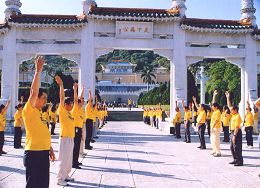 A Different Kind of Welcome

At 7:30 a.m. every day in front of the Shilin Chiang Kai-shek Official Residence, there are practitioners dressed in yellow shirts exercising along with the music. Their movements are slow, harmonious, and graceful. Several practitioners hold posters with the facts about Falun Dafa and some distribute fliers to the passersby. 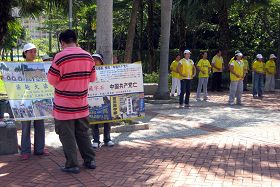 A Chinese tourist reads the posters with facts about Falun Gong. The practitioners are doing the exercises on the right. 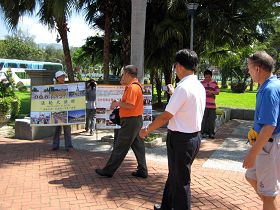 One morning a bus came with dozens of tourists from China. The practitioners welcomed them to Taiwan and told them that Falun Gong was practiced by people in at least 100 countries around the world. “Please read and learn more about Falun Gong. It improves your health and upgrades your moral standards. Please choose a beautiful future for yourself,” said one of the practitioners.

A Special Reward at the Shilin Night Market

When evening comes, many people go to the Shilin Night Market. The market has been around since 1909 and is known by people around the world for good food, such as wrapped biscuits, hot pot on the rock, giant sausages, oyster pancakes, chewy starch balls, and pearl milk tea.

Every night dozens of practitioners stand in front of the front entrance of the Night Market holding posters with Falun Gong information and distributing fliers. Some Chinese tourists read and talked about Falun Gong. One of them said, “I heard that there are a lot of practitioners in Taiwan and the poster said that people around the world practice it freely. How come it is all different in our country?” Her companion replied, “Something’s wrong with what's happening in our country, not with Falun Gong but with the Chinese Communist Party (CCP).” 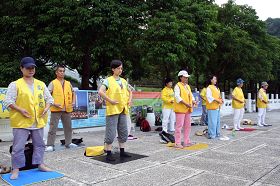 Practitioners clarify the facts in front of the Palace Museum. 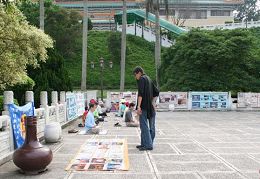 Chinese tourists come to understand the facts about Falun Dafa.

A practitioner held a poster telling the Chinese tourists how the CCP suppresses practitioners, tortures them, and even steals their organs for profit. A tourist from China told the practitioner, “We understand the bad business the CCP is in. Please go home, it is really hot out here.” The practitioner told him that they would not stop their efforts until the persecution ends. The tourist thanked the practitioner for the hard work. Another tourist said, “I don’t get out of the country often. It would be a shame not to find out something about Falun Gong while I am here. There is no way to find practitioners in public in China. Seeing the pictures of people around the world practicing makes me feel good.”

A Window that Leads You to the Truth

The Palace Museum has a collection of treasures dating from the Song, Yuan, Ming, and Qing Dynasties that used to be in the Forbidden City. The treasures draw a large number of visitors from around the world. Rain or shine, the practitioners go to the museum every day to exercise, distribute fliers, and clarify the facts to the tourists.

One day a tour guide who had learned the facts about the persecution of Falun Gong told the entire group of Chinese tourists, “Come, sit together, and listen to her.” Ms. Hu quickly told them about how the CCP staged the self-immolation incident in Tiananmen Square in 2001 to falsely accuse Falun Gong. She also told them about the movement to quit the CCP. A tourist told Ms. Hu that one of the tourists was a county magistrate. After listening to Ms. Hu, the magistrate smiled and told her, “I heard you. I will quit the CCP today, and so will my wife.”

A little girl got a bookmark with “Falun Dafa Is Good” written on it. She ran to her mother to tell her what was written on the bookmark. The mother nodded to the practitioners and smiled, “I admire you. Please continue what you do to help people understand Falun Gong.”