(Clearwisdom.net) Qiqihar City is located on the beautiful Songnen Plain. Qiqihar City used to be called Zhalong County, and it is the natural habitat for red-crowned cranes. Therefore, Qiqihar City is also called the Crane City. Red-crowned cranes are normally called the divine cranes. So when people see them, they often think of China's ancient cultivation culture, and especially of those great enlightened people who used to sit on a crane and fly away. Master Li Hongzhi gave lectures on the Fa in Qiqihar City on July 16, 1993. Many Falun Dafa practitioners had the honor of listening to Master Li's lectures.

When Master came to Qiqihar City, he stayed in Room 301 of the Wuyi Hotel. He was in a white shirt and looked handsome. Whenever he asked the waiter to open the door, he always said in a very polite way, "Excuse me, could you please open the door for me?" Many waiters in the hotel saw the tall, great, compassionate, and kingly Master and felt that he was so nice and approachable that he must be a great person.

Wuyi Hotel was very close to the Culture Palace and Longsha Park where Master addressed us. In the morning, Master often took a walk in Longsha Park. One day, he saw a lady carrying a twelve-year-old boy. Master asked her, "What's wrong with him?" She replied, "He is paralyzed." Master said, "Put him down." The lady said, "He is paralyzed." Master told her to put him down. Then Master moved him a little bit, and the boy stood up. Many people came over and were very surprised, "He is able to stand up!" The lady was so excited that she said, "He is a supernatural being. I must thank him." When she was going to say thank you to Master, she saw that Master had already walked away.

Many people in Qiqihar City still remember that in the front of Gate No. 2 of Longsha Park, there was a man from Southern China pulling people's teeth. The teeth he had pulled formed a small hill. Master talked about that in Zhuan Falun.

"When I taught a class in Qiqihar, I saw a person who had a vendor stand on the street and was pulling teeth for people. One could easily tell that this person came from the South, as he was not dressed like a Northeasterner. He would not refuse anyone who came to him. He would pull a tooth for anybody who came, and he had there a pile of pulled teeth." ("Lecture Seven" in Zhuan Falun)

Master had sent out a lot of Faluns to find those people who had predestined relationships in Qiqihar City. Before Master gave the lecture in Qiqihar, a practitioner felt that Falun was rotating on his body. He was really confused. It was not until he listened to Master's lectures that he fully understood what had happened to him. Master Li personally set up the Assistance Center and exercise site for Qiqihar practitioners. He asked us not to see him off at the station. Instead, we waited outside of the Culture Palace to say goodbye to Master. We were there in tears until Master disappeared in the midst of the darkness. 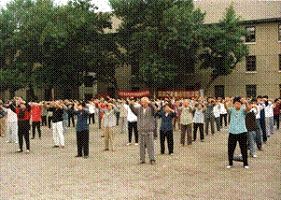 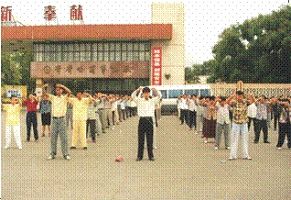 Before 1999, Qiqihar practitioners did the exercises together

Falun Dafa is a high-level cultivation practice guided by the characteristics of the universe: Truthfulness-Compassion-Forbearance. In 1992, Mr. Li Hongzhi first taught Falun Dafa publicly in the city of Changchun, China and then continued to lecture all across the country.

However, the beautiful practice is brutally persecuted by the Chinese Communist Party in Mainland China. In July, 1999, because of jealousy, then Chinese Communist Leader Jiang Zemin launched the persecution. He also set up the 610 Office to break practitioners down mentally and physically and cut off their economic resources, which directly led to the death of several practitioners in Qiqihar. Many practitioners were taken to forced labor camps and prison. Some became homeless to avoid further persecution. Countless families were broken up. Thousands of Falun Dafa practitioners have been killed for their organs, which were sold for enormous profit in the transplant trade.

However, Falun Dafa practitioners are not poisoned by the Communist Regime's slander. Neither did they give up practicing cultivation. During the past ten years, practitioners have resisted the persecution in a peaceful and rational way and persisted in telling people the facts about Falun Dafa.

Today, Falun Dafa is practiced and cherished by over 100 million people in over 100 countries, and has received honors worldwide. The Falun Dafa books have been translated into more than 30 languages. Truthfulness-Compassion-Forbearance belongs to the world.

“Finding My Shortcomings Thanks to the Seventh Internet Experience Sharing Conference”

“Practitioner Mr. Chi Zhi Died as a Result of Persecution in 2009”