(Clearwisdom.net) On the evening of Friday December 3, the West Chester Old Fashioned Christmas Parade was held in West Chester, a borough in the Philadelphia metropolitan area. This year, the Falun Gong waist drum team was once again invited to participate in the parade. The waist drummers were the only Chinese procession in the parade. 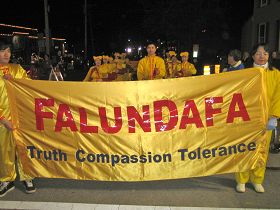 This was the 30th annual Christmas parade in West Chester, with more than 100 groups participating. Colorful floats, bands, and more than one thousand performers in colorful costumes entertained tens of thousand of enthusiastic spectators along the parade route.

The waist drum team, composed of Falun Gong practitioners wearing golden costumes stood out among the many groups taking part in the parade. Many spectators accepted flyers introducing Falun Gong. The group was applauded warmly when they passed by the reviewing stand.