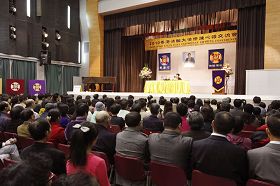 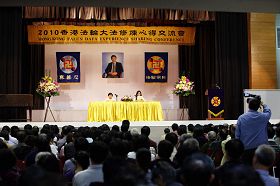 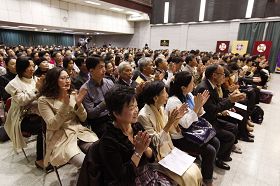 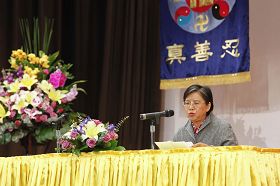 Shanghai practitioner Aihua Zheng, who was recently rescued by overseas practitioners, shared her experience in sending righteous thoughts and clarifying the truth to the world's people. She started practicing Falun Gong in 1997, and she was not involved in truth-clarifying activities until 2003, when she ran into a truth-clarifying site in Hong Kong. In 2005, after becoming a Hong Kong permanent resident, she decided to go back Shanghai to clarify the truth. Unfortunately, she was arrested in 2006. While in custody, she refused to cooperate with the authorities, as she knew she had committed no crime. She took every possible opportunity to clarify the truth of Falun Gong to the guards.

Several practitioners from Hong Kong truth-clarifying sites shared their experiences in reaching mainland Chinese with the truth, and shared their personal breakthroughs in cultivation.

After letting go of her attachment to money, Taiwan practitioner Baohai Jiang said she stayed in Hong Kong for six months to clarify truth to Chinese tourists. During this time, she helped over 2,000 people quit the Chinese Communist Party and its affiliated organizations.

Hong Kong practitioner Quan Yuan shared how the people have changed. Some Chinese tourists, and sometimes also tour guides, say "Falun Dafa is good" when they see the practitioners. A policeman once told them, "Go Falun Gong! We support you. If Jiang Zemin comes to Hong Kong, we will send him to prison."

Practitioner Meiyun Yang shared how she strives to treat everyone around her with sincerity and compassion. Everyday people who distribute commercial newspapers near her site told her that her attitude inspired them. A police officer who became familiar with her over the years was deeply impressed by her perseverance. He once said, "Sister, you sure are carrying a heavy load!"