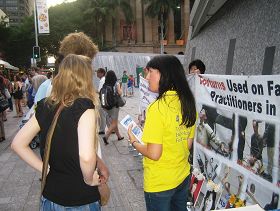 A practitioner explains the persecution to passersby 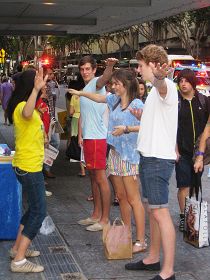 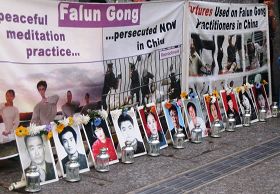 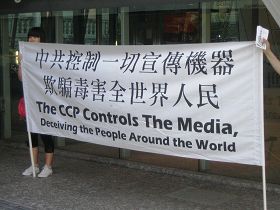 Protest in front of the Chinese Consulate

Christina, an employee of an international human rights organization, expressed her support for Falun Gong. She said the evil persecution will not be able to continue if everyone stands up against it. She said: "Human rights violations are horrible no matter where they happen. I feel sad that such a thing is still happening in the world." Christina said: "I want to say to the Chinese Communist Party that they have no right or reason to persecute Falun Gong practitioners. Chinese people don't like and don't need such a government. It is unimaginable that such a government even exists."

Pamela has been practicing Falun Gong for a long time. Her diseases were cured soon after she began the practice. She came to the event to raise awareness about Falun Gong with her own experiences. She told people that Falun Gong gave her back her health, but it has been ruthlessly persecuted in China. "I've lived in Australia for 20 years. People value human rights, beliefs and freedom here. The situation is the opposite in China. The Chinese government should know that human right is a universal value and stop the persecution right away."

Many people stopped to learn about the situation in China and signed the petitions. Some of them helped practitioners to pass out materials. Several people learned the exercises.

“The Power of Compassion”