(Clearwisdom.net) On November 7, the Service Center for Quitting the Party in Tokyo held a rally and parade, supporting 83 million Chinese who have quit the Chinese Communist Party (CCP) and its affiliated organizations. 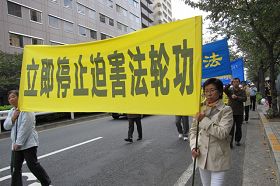 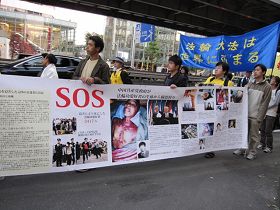 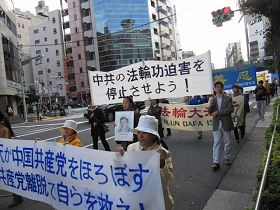 The parade went through the busiest streets in downtown Tokyo and drew the attention of many people. They accepted truth-clarifying materials and expressed their support for Falun Gong. Several Chinese students were surprised to see the parade. They talked to practitioners and said that they were willing to learn more about Falun Gong.

Mr. Xia Yifan, the representative from a Chinese democracy movement organization in Japan, spoke at the rally. He expressed his support for the Chinese withdrawals. He said that the "Quitting the Party' movement is one of the largest democrat movements in the history of China, and it shows that more and more Chinese people have accepted the universal values of human rights and are choosing to leave the evil CCP.

Ms. Wu Lili, a Falun Gong practitioner, called upon attendees to help rescue her sister, Wu Xiaohua, who was sentenced to five years by the CCP because of her Falun Gong belief. Ms. Wu said her sister has been badly tortured in jail.

“Details of the Persecution Ms. Zhang Guiqin from Qiqihar City Was Subjected to Before Her Death (Photo)”

“The Media in Poland Focus on the Lawsuit against Jia Qinglin”