New Form of Torture Devised in Harbin Prison: Sitting on the Side of A Small Folded Stool (Photo)

(Clearwisdom.net) The Chinese Communist Party officials in Harbin Prison, Heilongjiang Province, especially guard Zhang Jiushan, have tortured Falun Gong practitioners cruelly by all possible means. Guard Zhang started persecuting Falun Gong practitioners as soon as she became commander in June 2002. She created a new torture - "sitting on the side of a small folded stool"- to use on practitioners, and has caused great damage to them both physically and spiritually. 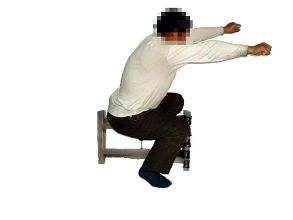 When the officials use this kind of torture, they fold this stool until it forms a kind of bar, then erect it on the ground. The practitioner is forced to sit on it (like riding a horse); it is only 2.5 to 3 centimeters wide and in the middle there are bolts sticking out. It's very difficult for anyone to sit on it straight, but they force practitioners to sit straight, with their hands on their knees. Sometimes they order practitioners to pose, stretching their arms forward in parallel or stretching their arms to both sides like wings. The practitioners are ordered to sit straight and upright. Personal cangues hover over them. They punch, curse and kick practitioners whenever they move even a little. An average person couldn't even endure several minutes of this. The practitioners that firmly believe in Dafa, and who refuse to be transformed are forced into slave labor. They are made to walk in the daytime, and then for 6 hours they are forced to sit on the side of the small folded stools. Any practitioner moving even a little is given a severe beating.

On March 18, 2004, Zhang Jiushan instigated prisoners to torture Mr. Sun Dianbin, Mr. Li Chengyi, Mr. Zhang Yuliang and Mr. Zhang Chuanduo. They forced these practitioners to sit on the sides of the small folded stools holding their heads against the wall. Any practitioner moving even a little was beaten. They were not allowed to sleep until late in the night, and were forced to get up at 4:30 a.m. to continue sitting on the small folded stools. They were not allowed to take breaks while walking in the daytime.

In the spring of 2004, Mr. Yuan Qingjiang was arrested and taken to Harbin Prison. As he refused to be transformed, he was tortured by being forced to sit on the side of a small folded stool for 18 days. He was ordered to stretch his arms forward in parallel and to both sides. He was deprived of sleep and suffered violent beatings. Due to the severe torture, he had a pleural effusion, and became ultimately fatigued and faint. On July 1, 2004, Mr. Yuan Qingjiang was transferred from Harbin Prison to the No. 6 Area, in Daqing Prison. On July 23, 2005, he passed away.

On April 23, 2004, criminal inmate Guan Dejun said that Mr. Li Chang'an didn't follow the rules, using it as an excuse to persecute Mr. Li Chang'an and other practitioners. Guang Dejun forced all of the practitioners to sit on the side of small folded stools, sitting upright, with both hands on the knees. They were under direct surveillance from 9:00 p.m. to 12:00 a.m.. They were again ordered to sit on the stools again from 4:00 a.m. to 6:00 a.m., ending at breakfast time. Afterwards, they were forced to write three statements to renounce Falun Gong.

Mr. Yang Yizhong was allowed to sleep for only one hour a day. Due to long duration of the tortures, by being forced to sit on a small folded stool, his hips rotted. He was also often beaten.

Mr. Zhang Yuliang was often forced to sit on a small folded stool for 6 hours from 6:00 p.m. to 12:00 a.m.. He was beaten whenever he moved a little. He suffered a severe beating while being detained in a small isolated cell. They twisted his wrists; the severe inflictions were extraordinarily painful.