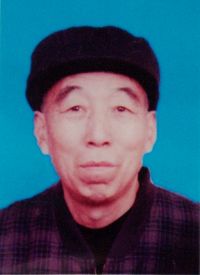 Li Jiagong started practicing Falun Gong in 1995, and his long-term health problems caused by high blood pressure disappeared soon after. After Dafa had shown its positive effects on Li Jiagong's health, his family members became Dafa practitioners one after the other.

After reports about the CCP's unfair treatment of Dafa practitioners in Tianjin City in April 1999, Li Jiagong went to Beijing to explain the goodness of Falun Gong. He attended the peaceful rally on April 25, 1999 at the National Appeals Office close to Zhongnanhai. After returning home, he was harassed periodically by a police officer surnamed Song from the Guangmingqiao Police Station.

On July 20, 1999, without the knowledge of his family, his boss colluded with officers of the Guangmingqiao Police Station in arresting Li Jiagong. He was taken to the former Lianfang Hotel, where he was detained for about five days. After unsuccessfully trying to coerce him into giving up his faith, the officers raided his home and confiscated his Dafa books and a picture of the founder of Falun Gong.

After the persecution started on July 20, 1999, Ma Luchang, CCP party secretary at Li Jiagong's workplace, arrested a few Falun Gong practitioners including Li Jiagong and took them to a brainwashing center to try to force them to give up their faith.

In 2001, CCP agents again arrested Li Jiagong and a few other Dafa practitioners at his workplace after colluding with the Guangmingqiao Police Station and the local 610 Office. Dafa practitioners were taken to Linzhang Brainwashing Center, where they were forced to watch videos that denigrated Falun Gong for 20 days. Their CCP memberships were also revoked.

During the time of the CCP's 16th annual convention, Li Jiagong was arrested for mailing information about Falun Gong. He was taken to the Su Cao Police Station, where he was handcuffed to a chair and deprived of sleep for over a week. Such maltreatment and physical stress caused the 63-year-old to develop a serious cough and a hernia. The instructor at the police station wanted to take him to the First Detention Center but the staff there refused to admit him because his systolic blood pressure was over 200. The Second Detention Center also refused to take him because of the high blood pressure reading. He was released after his family paid 3,000 yuan.

On July 3, 2003, Li Mingtao, Li Jiagong's son, was secretly sentenced to a prison term of 11 years. Today he is still being held in the 4th District of Shijiazhuang Prison, where he has been tortured. At one point he was unable to walk. Prison authorities refused to allow Li Jiagong and family to visit his son as they didn't want anyone to see how badly Li Mingtao had been treated.

During the past nine years, Li Jiagong suffered a lot as he missed his son and worried about his physical well-being. Local Party Secretary Ma Luzhang, Guangmingqiao police officer Song, Su Cao Police Station, and Congtai Hanshan Police Substation all regarded Li Jiagong as a "person of interest." Whenever there was a so-called sensitive date, the officers arrived at Li's home to harass and threaten him, and to ransack the home. Li struggled under this oppressive atmosphere until he eventually became very sick and died on January 13, 2009.

“Teacher is Caring for Me”