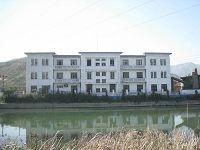 A photo of Longkou City Brainwashing Center, taken from the north

At 9:00 a.m., attendees from the different towns sat in rows in a meeting hall, and each person was given a notebook and a pen. One man started making a speech, which lasted two hours. After his speech, a group discussion session was held. People from three towns made up one group. The speaker made use of this discussion session to ask Falun Gong practitioners if they still practiced Falun Gong. He slandered practitioners who distributed Falun Gong information.

When a practitioner was asked if he distributed Falun Gong information, the practitioner answered, "I don't have materials at home; if I did, I would distribute them." The man said that he would go to the practitioner's home to search it and find out. Officials in Qijia Town did not send practitioner Mr. Li to attend the meeting; instead, they sent the security head of Mr. Li's village to attend, pretending that he was Mr. Li. During the meeting, following orders, the security head spoke and said, "My name is Li, I practice Falun Gong." The entire discussion meeting was videotaped. After the security head returned to his village, he told others, "It was so bad. The meeting was extremely oppressive and intolerable. I was told to act as a Falun Gong practitioner and make a false statement. I will no longer attend such meetings."

All the information and details about this "informal discussion" spread widely among the villagers, and many people criticized the communist regime's launching campaigns to fraudulently persecute good people.