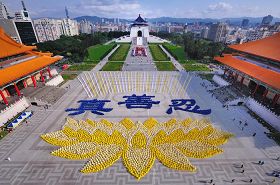 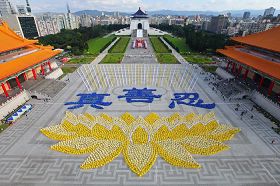 On November 27, 2010, over 5,000 Falun Gong practitioners formed a giant lotus flower and the three Chinese characters for "Truthfulness-Compassion-Forbearance."

Practitioners who participated in the character formation varied from children as young as 5 years old to senior citizens in their 70s. The site was very solemn and such an atmosphere affected bystanders. According to a practitioner who was distributing Falun Gong truth-clarifying materials, everyone stopped to gaze at the site when they received the materials. Sitting on concrete steps, some parents quietly watched the site with their children. Several Mainland Chinese tourists also took many photos and videos of the site. Some commented: "Very good. Impressive!" 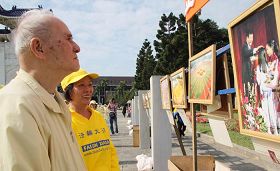 According to Chunmei Huang, vice chairperson of the Taiwan Falun Dafa Association, practitioners in Taiwan formed characters every year during the experience sharing conference and for World Falun Dafa Day. "Last year, we formed a Zhuan Falun book prototype and received very positive feedback. This year, with over 5,000 practitioners, we formed a giant lotus flower cushion supporting three Chinese characters: Truthfulness, Compassion, and Forbearance. Lotus flowers represent purity and the higher realm of practitioners, and Truthfulness, Compassion, and Forbearance are the guiding principles of Falun Dafa."

Shu-Jen Yeh, an economics professor at Taiwan University, was on the character formation team. She said that she felt so peaceful and honored to be part of this historic moment. "Cultivation is miraculous. Though it was a sunny day, I didn't feel hot at all. Instead, I was deeply immersed in the energy field, which made my body very comfortable.

Yeh is 55, and she had a number of chronic diseases which all disappeared after she started to practice Falun Gong.

Dimal and Damith are from Sri Lanka. They were so happy to be able to attend this large conference and to be part of this character forming event. They both started to practice Falun Gong in 2003, and were two of the very first practitioners in Sri Lanka. 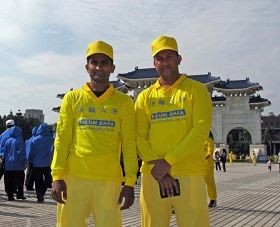 In Taiwan, there are over 1,000 Falun Gong practice sites in over 300 townships including Penghu, Jinmen and Mazu (three small islands near Mainland China).

In contrast, the Chinese Communist Party started to persecute Falun Gong practitioners in Mainland China in 1999. To date, more than 3,400 practitioners have died due to the persecution and tens of thousands are still in custody.

“Compassion, Truth, and Righteous Thoughts Win the Understanding and Support of Family”