(Clearwisdom.net) On November 25, Falun Gong practitioners from Mid USA participated in the Thanksgiving Parade on State Street in Chicago for the eighth time. They were the only Chinese group in the parade. 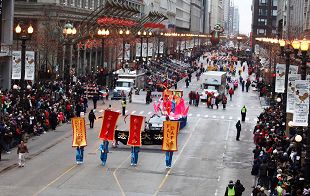 The Falun Gong entry in the parade 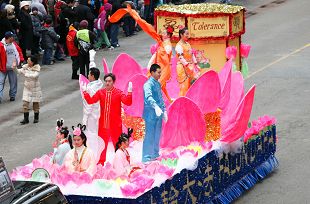 Practitioners demonstrate the exercises on the float 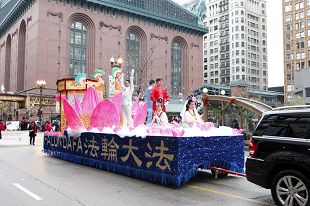 Practitioners demonstrate the exercises and a fan dance on the float

The Thanksgiving parade in Chicago is the second largest one in the US. One hundred and twenty groups participated this year. WGN TV covered it live, broadcasting to over seven million American households.

Falun Gong practitioners decorated the float with lotus flowers. They demonstrated the exercises on the float and performed Chinese dance, which were warmly welcomed by the spectators.

“Revive the Divinely Inspired Culture and Appreciate Its Significance”