(Clearwisdom.net) The 2010 Korean Falun Dafa Cultivation Experience Sharing was held on October 23-24, 2010. Practitioners from across Korea attended, and shared their cultivation experiences. 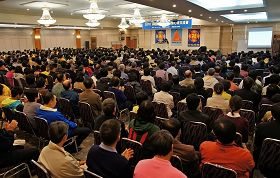 Group Fa study began at 4:00 p.m. on October 23. Practitioners then discussed their ongoing activity, the "Global one million signature collections to stop the persecution of Falun Gong." They also shared regarding their truth clarification to Chinese people and promotion of Shen Yun performances. The following day, practitioners did the exercises as a large group for two hours in the morning. The Fa conference officially began at 9:00 a.m., and twelve practitioners shared their cultivation experiences.

Ms. Kong shared how she made efforts to help fellow practitioners play their roles in achieving overall coordination during the promotion of the Shen Yun performance in her area.

Mr. Piao obtained the Fa in March 2009. He is a university student in the Department of Law. He talked about his improvement in understanding the Fa principles through group Fa study, and how he actively participated in truth clarification activities.

A Chinese practitioner discussed how she built up confidence in her work and everyday life, due to her practice of Falun Gong. She also talked about her experience in doing truth clarification and encouraging Chinese people to quit the Chinese Communist Party (CCP) and its affiliated organizations.

Korean practitioner Mr. Lu can only speak several sentences in Chinese, however, through clarifying the truth to overseas Chinese students and Chinese tourists, he has helped many people quit the CCP and its affiliated organizations. He said, "As long as we have one thought of saving sentient beings, it won't be a major barrier for us if we don't understand Chinese."

A woman Chinese practitioner spoke about how she sincerely and compassionately treated her parents-in-law, whose minds had been poisoned by the CCP's propaganda, helped them correct their understandings, and obtain the Fa.

Mr. Zhao is an Electronics Engineer in a large enterprise in Korea. He shared his understanding of the urgency of saving people and Master's compassionate and arduous salvation through his looking for his child, who left home and did not return for several hours. He said, "We should cherish every minute, and follow revered Master to fulfill our prehistoric vows no matter how difficult and harsh the situation.

A young practitioner in the fifth grade of elementary school shared her experience about participating in the Divine Land Marching Band to validate the Fa. She said, "Finally it came our July 20 parade performance. It was the first time that I played with other practitioners in a parade. I didn't want to interfere with the entire band because I didn't play my musical instrument well, so I sent forth righteous thoughts and calmed down. I then put all my effort into playing. Just before the conclusion of the parade, my arms were suddenly so painful that I was almost unable to raise them. I shouted in my mind, 'Master, please help me!' Soon after, my arm pain disappeared. So did my fatigue. I truly feel that Master is always nearby to help and protect me. Thank you, Master. "

After the Fa conference, many practitioners said that they had benefited a lot from the practitioners' sharings, and they would do well in the three things, improving overall coordination, and assisting Master in Fa-rectification.