(Clearwisdom.net) Pan Ke-chi from Taoyuan, Taiwan was an overweight and hyperactive child with a hot temper. Teachers and other elder relatives who knew him thought that he would never have any accomplishments after he grew up. But now, ten years have passed, and he has become a handsome, polite and rational young man. What power is responsible for such a big change? 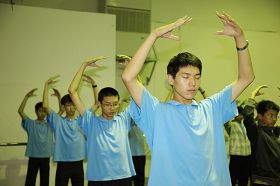 Ke-chi could not keep quiet when he was a child. Even when his mother held him in her arms, he would climb up to his mother's chest. When he was three years old, he saw his mother reading a glittering book and was curious. He asked his mother what the book was. His mother told him the book was Zhuan Falun. He asked his mother, "Is there a Buddha inside the book?" His mother was surprised, "Do you know Buddha?" He answered, "Sure, I know. Very bright! Golden! They are everywhere inside the book." His mother knew he saw Buddha via his celestial eye and so taught him poems from Hong Yin.

When he was in first grade in primary school, he started to read Zhuan Falun with the help of his mother. Because he was hyperactive, reading five pages every day took more than three hours. Three months later, he finished reading the book. It was extraordinary that from then on he knew all the words in the book, even though he was only in first grade.

Although he was naughty, he was sincere and never told a lie. But when he reached fifth grade, he had his own thoughts. He indulged in video games and started telling lies because he was not welcomed in class. His mother said to him in tears, "You had Truth-Compassion-Forbearance in your heart when you were younger. How come you have changed to such behavior?" He felt sorrow, but facing the difficulties in daily life, he still played video games to be a hero in a virtual world. He did not practice the exercises or read Dafa books.

In 2009, his mother brought him to attend the Washington DC Falun Dafa Cultivation Experience Sharing Conference. He watched the video showing young practitioners in Feitian Academy of the Arts and was moved. He said, "I was very touched. I found the lofty goal of human life. I knew why I practiced Falun Dafa." He started to read Dafa books extensively and paid attention to moral improvement. He gradually stopped playing video games.

He knew he needed to follow Truth-Compassion-Forbearance, but he could not hold his temper when in conflict with his younger brother. Later he understood from learning Dafa that when a practitioner has conflict with ordinary person, it is always the practitioner's fault. He gradually understood that his kindness towards his brother was superficial, not from the bottom of his heart, because he had jealousy occasionally. He started to pay attention to his thoughts and took care of his brother from deep in his heart. After that, his younger brother started talking to him with a smile and it seemed no conflict between them had ever happened.

From the first to second year in middle school, he had a big change that surprised even himself.

Ke-chi's father is a soldier and rarely stays with his family. When Ke-chi was a child, he felt his father was a bad man as his father beat or verbally abused him, his brother and his mother once upon returning home. Thus he had severe conflict with his father when he was in middle school. He had tears when he stood in front of Master Li's photo. He said, "As a practitioner, I felt sorry for not being able to have forbearance. I know practitioners' forbearance is not endurance with tears, but endurance without any anger or grievance. Facing my father, I could not have forbearance with inner peace because I did not get rid of my fundamental attachment. I took him as an enemy and could not love him. My mother told me, 'You should read Dafa books more and improve your understanding on the basis of Dafa. Then you can truly forbear.' I followed my mother's suggestion and understood from Dafa, 'He is not an enemy. He is my father, a sentient being to be saved.' My inner heart became peaceful. My father underwent a big change too as he agreed that I could apply for admission to Feitian Academy of the Arts."

Feeling it is very hard to not be affected when studying in ordinary schools, Ke-chi applied for admission to Feitian Academy of the Arts in Taiwan after it initially recruited students. He yearned for an environment to improve his xinxing and artistic skills. But tribulations came. He failed in his first admissions test. His brother was admitted instead. His attachment surfaced again. With jealousy in his heart, he could not improve his skills. He felt painful in life as he generally could not get what he wanted. He wondered why. When he could not pass the tribulation, the words in Zhuan Falun gave him a hint, "One's Gong level is as high as one's xinxing level." He understood that he had a problem with his xinxing and that he could not improve his skills as bad substances were not discarded and his level was restrained by universal characteristics. After understanding the principle, he returned home to practice forming a straight line with both legs on the floor in opposite directions. He could do it right away. His mother was surprised and wondered how his inflexible joints could change so quick? After Ke-chi shared his experience, both of them were touched. His mother said emotionally, "Master Li has given us so much. If we don't cultivate well, we would be ashamed to face Teacher and our lives would be wasted."

Ke-chi said, "My dancing art journey started from xinxing improvement. My skills will fall short if I do not keep raising my xinxing."

Currently, Ke-chi is in grade 3 in Feitian Academy of the Arts. Besides studying professional courses, the school also had an environment for them to read Dafa books and practice the exercises. He said, "When I have no thoughts during practicing the exercises, I will have a high spirit in class. If with various thoughts during practice, I will have a rough spirit the whole day. If I read Dafa books with concentration, I can finish my class work in half an hour and have a good score on the exam. If I am distracted while reading Dafa books, I will have a hard time doing my class work and get a poor score or fail next day's exam." He found that studying the Fa directly relates with his daily life.

Though entering the school that he yearned for, tribulations were not less. In his new environment, he could also have conflicts with his classmates. When he just entered the school, he was happy every day. After one or two weeks, he felt many classmates were not friendly towards him. After studying the Fa and sharing experience with his mother, he understood that he did not do well. Master Li also give him hints when he was in tribulation and having a hard time understanding why in his heart. He passed one tribulation after another. His mother noticed his changes every time he returned home. When he returned to his middle school to visit his previous teachers and classmates, they were surprised at his transformation and became interested in Feitian Academy of the Arts.