(Clearwisdom.net) On November 13 and 14, 2010, Chinese Premier Wen Jiabao came to Macao to attend the China-Portugal Forum. Local Falun Dafa practitioners rallied at the most bustling street in Macao for two days, calling on people of all walks of life to help stop the persecution and bring the Communist Party's head criminals Jiang Zemin, Luo Gan, Liu Jing and Zhou Yongkang to justice. 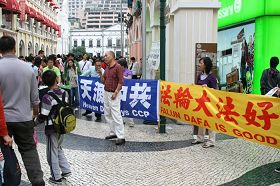 Falun Dafa practitioners clarify the truth to visitors in Macao. 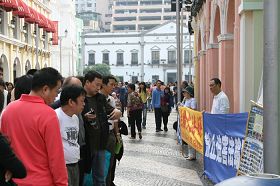 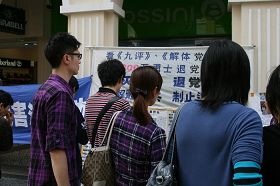 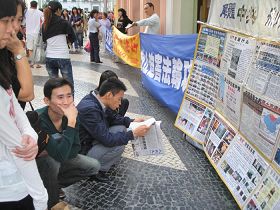 Chinese tourists squat down to read the display boards 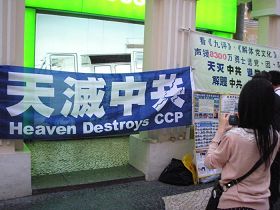 A tourist from Mainland China takes a video of a banner. 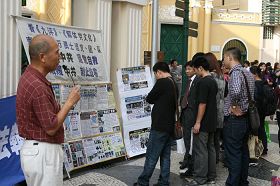 Today, Falun Gong is practiced by over 100 million people in 60 countries. The main works of Falun Gong are available in over 30 languages.

During the weekend, about 100,000 Chinese tourists came to Macao for shopping and sightseeing; the Rose Plaza is a must-go tourist place. At the rally, many tourists stopped to listen to the speeches and took photos. Many visitors also publicly announced their withdrawal from the Chinese Communist Party and its affiliated organizations.

Some mainland Chinese tourists were surprised to see the banners such as "Falun Dafa is good", "Heaven Will Destroy the CCP" and "Stop the Persecution of Falun Gong" and other tourists would tell them, "You can see more Falun Gong banners in Hong Kong and Thailand." When the China-Portugal Forum was over, some of the communist officials came out to visit Rose Plaza. The practitioners passed the Nine Commentaries on the Communist Party books to them just like any other tourists. But they dared not to read them. You could see them looking out of the corners of their eyes at their companions and then quickly scanning the banners and display boards. You could feel the sadness and lack of freedom under the Communist Regime. Seeing this only made the practitioners more persistent to clarify the truth to the Chinese people and help them withdraw from the evil Communist Party.

“Cultivating Myself While Clarifying the Truth”