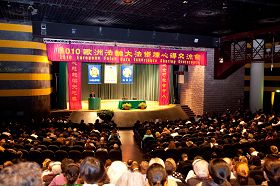 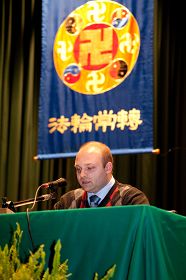 Lukas from the Czech Republic talked about how to overcome selfishness. He said that during the process of promoting Shen Yun, practitioners from Czech let go of their own attachments and cooperated with the Shen Yun office. They put Shen Yun at the highest priority and sold out 94% of the tickets. He said letting go of self was the key to success.

Mr. Wu, the contact person of the European Falun Dafa Association, talked about his understanding of collaboration. He said: "Whenever I have negative opinions about other fellow practitioners, we cannot collaborate well. As a contact person, I realize that I should focus on the strengths of other practitioners, and assign tasks to them according to their strengths. I realized that every cultivator has his own shortcomings, just like I have mine. So I should not form negative opinions towards them just because I see some shortcomings in them," Mr. Wu said.

Mr. Wang from Austria talked about a similar understanding. He said: "The contact person is like a theme, and every practitioner is like a precious pearl. The function of the contact person is to make connections and make a necklace so that the value of every pearl can be manifested." He said: "During the process of promoting Shen Yun, those who are good at art and music can help with the flyer design, those who are good at cooking can make food for the Shen Yun performers. I am not good at those, but I can help with other things." Mr. Wang also said if one can let go of oneself, he or she will see the beauty of other practitioners. 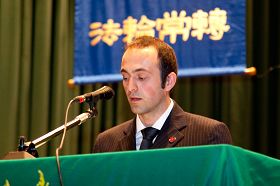 Marco from Italy has been practicing for four years. He said that he had an attachment to controlling everything and he did not believe in other practitioners' capabilities. He said once he put down his attachment, he saw the power of the Fa. "If we follow the Fa, Master will arrange everything for us. Every practitioner is precious, so we should see them positively and give everyone chances to cultivate themselves," he said. 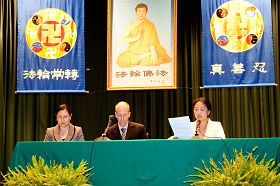 The Shen Yun promotion team from Sweden talked about how to collaborate well with fellow practitioners to promote Shen Yun.

Practitioners from France shared their experiences of convincing Chinese people to quit the communist party at famous tourist spots in Paris. They talked about how they form a whole body. One practitioner said that she had fear before and didn't dare to talk to Chinese tourists. Later, she let go of this attachment, and realized how urgent it is to save people. Now, she sometimes is able to convince more than 100 Chinese people to quit the party within one day.

Ms. Zhang from Netherlands talked about her experience of calling people in China and convincing them to quit the Communist Party. She said the key is to be compassionate to everybody, no matter how bad their attitudes are. 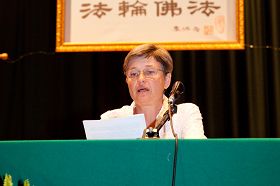 Gela from Romania learned about Falun Gong through the Shen Yun show and Truthfulness-Compassion-Forbearance Art Exhibition. She started practicing one year ago. She felt a strong energy flow right after she did the exercises. She said when she saw fellow practitioners' shortcomings, she thought about quitting the practice. Then she eliminated this unrighteous thought. Instead, she joined several truth-clarifying projects, and she treats the conflicts among practitioners as chances to improve herself. 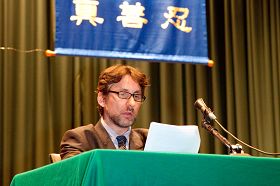 Dejan from Serbia shared his five year cultivation experience. He talked about how to treat fellow practitioners and family members; how to do the three things well and do his regular job well. He runs a hotel, and he talked about how he runs it with the principles of Truthfulness-Compassion-Forbearance.

Many practitioners expressed that they learned a lot from the sharing. Karsten, a German police officer, was touched by the sharing about cooperation. In his work, he gives orders to his subordinates and they obey him unconditionally. So, sometimes he treats fellow practitioners that way too. He expressed that he would improve himself when conflicts arise in the future.

Jorge from Spain started practicing five months ago. He had been looking for the meaning of life. One day, he saw Falun Gong at a health fair, and began learning the practice right away. He expressed that he benefited a lot from the conference. Mari Carmen, a Spanish practitioner who has practiced for 9 years, expressed that as a cultivator, one should not emphasize oneself, and should not do things based on one's own self-interest. Instead, one should cooperate with other practitioners unconditionally.