(Clearwisdom.net) Falun Gong practitioners held a rally to protest against the Chinese Communist Party's brutal persecution of Falun Gong in front of the European Council during the EU-China Summit in Brussels, Belgium on October 6, 2010. Vice President of the European Parliament McMillan-Scott sent a representative to show his support. Director of Human Rights Without Frontiers International gave a speech at the rally. AP, Reuters and other media sent reporters to the rally. 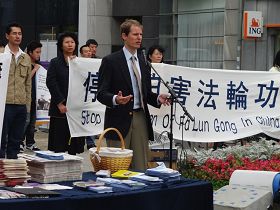 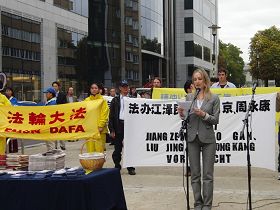 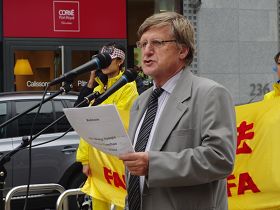 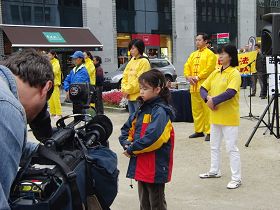 A reporter takes video of the rally

Ms. Jin Zhaoyu came to the rally from Finland. Her mother Chen Zhenping, a Falun Gong practitioner in Henan Province, China, was thrown into prison for an eight-year term. Ms. Jin said because her mother refused to sign a statement to give up her belief, she was forced to do fifteen hours of slave labor a day, and was often beaten and tortured. Several male jailers ruthlessly kicked her and broke two of her ribs. About two weeks ago, Ms. Jin received an email from Chinese police in Zhengzhou, brazenly threatening that her mother would be harmed if Jin continued to call for her release. Jin sincerely pleaded at the rally, "The CCP has never ceased the persecution of Falun Gong in the past eleven years. I call for your attention and help for my mother." The audience was moved to hear about Jin's mother. It is the true situation that hundreds of thousands of Falun Gong practitioners face in China.

Director of Human Rights Without Frontiers International Mr. Willy Fautre said Falun Gong practitioners were certainly the main victims of the CCP regime. Many of them died from the persecution. He said that the European Union shouldn't forget its principal values of democracy, legal institution and human rights, and should help those who share and safeguard these values.

“Realizing the Power of Compassion in Falun Dafa”